The Hampshire trio embarks on a quest of self-discovery and growth with their long-awaited debut album. 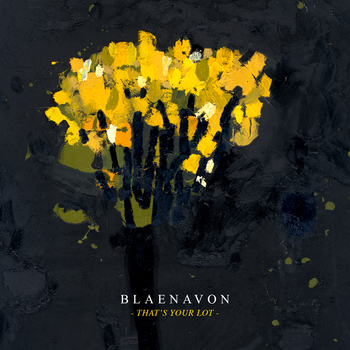 It’s been a long time coming with this one. Blaenavon have finally come around to release their debut, and it sounds just as lush and haunting as the town they are named after. Rising from the backdrop of intelligent indie music, Blaenavon explore the ethereal themes of youth and heartache as well as existentialism and duality, making themselves a voice of their generation.

That’s Your Lot is a tumultuous journey. Through the twelve tracks, the Hampshire trio embarks on a quest of self-discovery and growth, unravelling both lyrical and musical barriers on their way.

From the opening track, Take Care, Blaenavon introduce themselves with a convenience, drawing on the fragile lines between brooding and emotive. Casting themselves into cascades of heartfelt instrumental alignments there is no holding back. The track simultaneously possesses a sense of desperation and compassion. The emotive sensitivity in the structure of the tune is something that transfers throughout the record, making That’s Your Lot flick at your heartstrings.

The luscious soundscape and rustic textures of Harris McMillan’s percussion on Orthodox Man counterpoint with the sardonic lyrical twists on Let’s Pray. The cut continuously veers around, luring you into enjoying the self-deprecation and the capturing melody.

The gloominess implies a much older age than their 21 years, yet the guitar to bass co-existence injects beams of adolescent hope in the gravest of melodies. Lonely Side captures this duality in its most intricate manner. It is a stream of consciousness and the darker depths of the lyric provides an eternal escapism for any fragile soul to grasp onto.

Alice Come Home flourishes as Frank Wright’s blasphemous bass and the infectious drums lifting Ben Gregory’s characteristic vocals out of the noise. The shifting layers and soaring settlements add a sense of unpredictability to the tune. Putting in three tracks exceeding the six-minute mark is definitely a ballsy move, yet the trio seemingly shies no challenges.

The passion and absentmindedness sprinkling Blaenavon’s sound goes hand in hand. Everything is heartfelt, yet not necessarily fastidiously tampered with, giving the melodies a forgiving sense of humanity and humbleness. The prolific shifting landslides of intertwining instrumentation and gripping lyricism has a character that’s instantly recognisable.

The sweeping riffs of I Will Be The World – hypnotic, transcendent, and forever floating are grounded by the drums firmly hammering through. The re-edition of the tune reaches its full potential in an intoxicating crescendo of paralysing energy.

Gregory’s deep idiosyncratic vocal reflects the lot’s general sound: suffocating chords, daunting percussion and optimistic twinkles in the sea of darkness. Though Blaenavon dip into the darker corners of the human consciousness, there is always a hope to hold onto. Swans has your knees weakening under the weight of the world, and though this tune is already well rehearsed, the album version adds a bigger context to the song.

The title-track does in many ways sum up the record. Though it is a lot calmer and more settled than some of the tunes, it embodies that distinctive melancholia that Blaenavon master so well. I’d hate to fall for the cliché, yet coming of age is a reoccurring idea that manifests itself throughout the record. As frontman Ben says himself: “‘That’s Your Lot’ is 5 years of our lives condensed into 59 minutes of yours.” And the avant-garde yet ambitiousness of the release makes That’s Your Lot one for the most unique debuts out there.