THE BIG MOON “Love In The 4th Dimension” Review

The Big Moon soar on their debut, yet the tedious cliché gets the better of them. 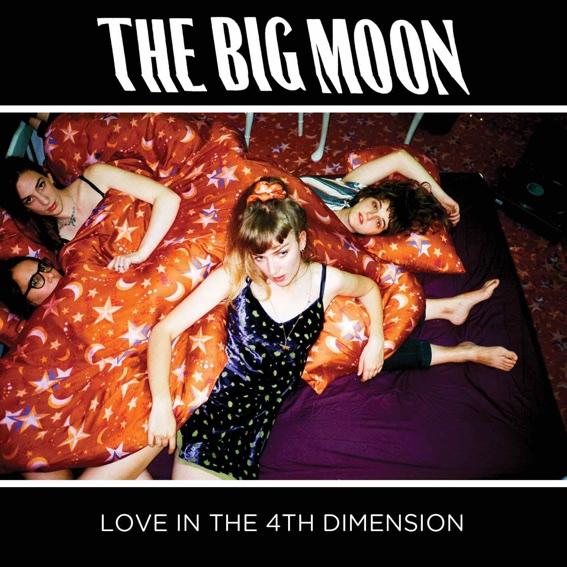 The Big Moon are on a roll these days and the girls have finally stepped up to take their chance on the album format. Their debut Love In The 4th Dimension is an intricate offering with a tiny cringe warning.

Coming off to an interesting start with hazy tune Sucker, The Big Moon showcase their meticulous eye for intricate melodies. The staccato drum work is oddly paired, and mismatched, with curtains of swaying guitars. Jules Jackson’s deep seated vocals possess a certain seductive twist, a special feature on top of the grasping soundscape.

The album does sport some re-edition of previously released material, including teasing Cupid. The delirious tune involves a lot of crooning and slamming but sadly little substance to grasp for.

The following tune, Formidable, excels with its intelligent and repeatable lyrics. The toned down melody is cohesive and hypnotic in its simplicity. “Did she make you swallow all your pride” Jackson half-teases, showing a vocal quality that rarely gets a space on the eleven track long record. The tune does eventually escalate into full Big Moon proportions with Soph Nathan’s slaying guitar centring the compact structure.

Bonfire might be a live favourite, yet the recording adds little to the tune. The rowdiness always hovers on the edge of being too much, yet it does have serene moments capturing a beautiful fragility that sadly is fest swallowed up in the madness of the tune.

Happy New Year comes as a little spark with its delicious vocal harmonies and transcendence. “Never gonna be this young” captures the realness of adolescence slowly seeping away. The little melancholic tang clinging to Celia Archer’s bass-lines reinforces the feeling of nostalgia, retrospects with a slight sense of lust embodying the essence of the tune.

Title track Love In 4th Dimension starts off just as soppy as you’d imagine from the name. It has a cliché tint, yet the melody is sharp and emotive, bringing forth almost enough cool vibes to cover up the pompousness. It is a juxtapose of a song, posing just immensely good and cringingly awkward elements together like the least obvious tune ever.

Zeds might come off to a daft start, yet it is everything but sleepy. The dazing melody lures you into a dreamy universe; maybe we finally reached the 4th Dimension?

Love In The 4th Dimension rounds up just as deliciously cheesy and soppy as you’d expect. The final track, suitably called The End, is a tedious love affair and listening to it is like observing lovers that are just a bit too romantic for your liking. It’s sickly sweet and just a tad pretentious. It’s a love / hate thing I guess.

The Big Moon soar on their debut, yet the tedious cliché gets the better of them. The female narrative is refreshing and the album definitely have moments of enchanting clarity. It is just a bit too lovely. The raw and sparkly personality the band possesses live has bowed down for a fastidious approach that covers all the oddest of details, and leaving you with an awkwardly flat record.