In Conversation with THE BEACHES

“If you love what you are doing and you keep at it, success will follow”, Canadian rock four-piece The Beaches reflect on the process of working on their debut album, touring and women in music industry. 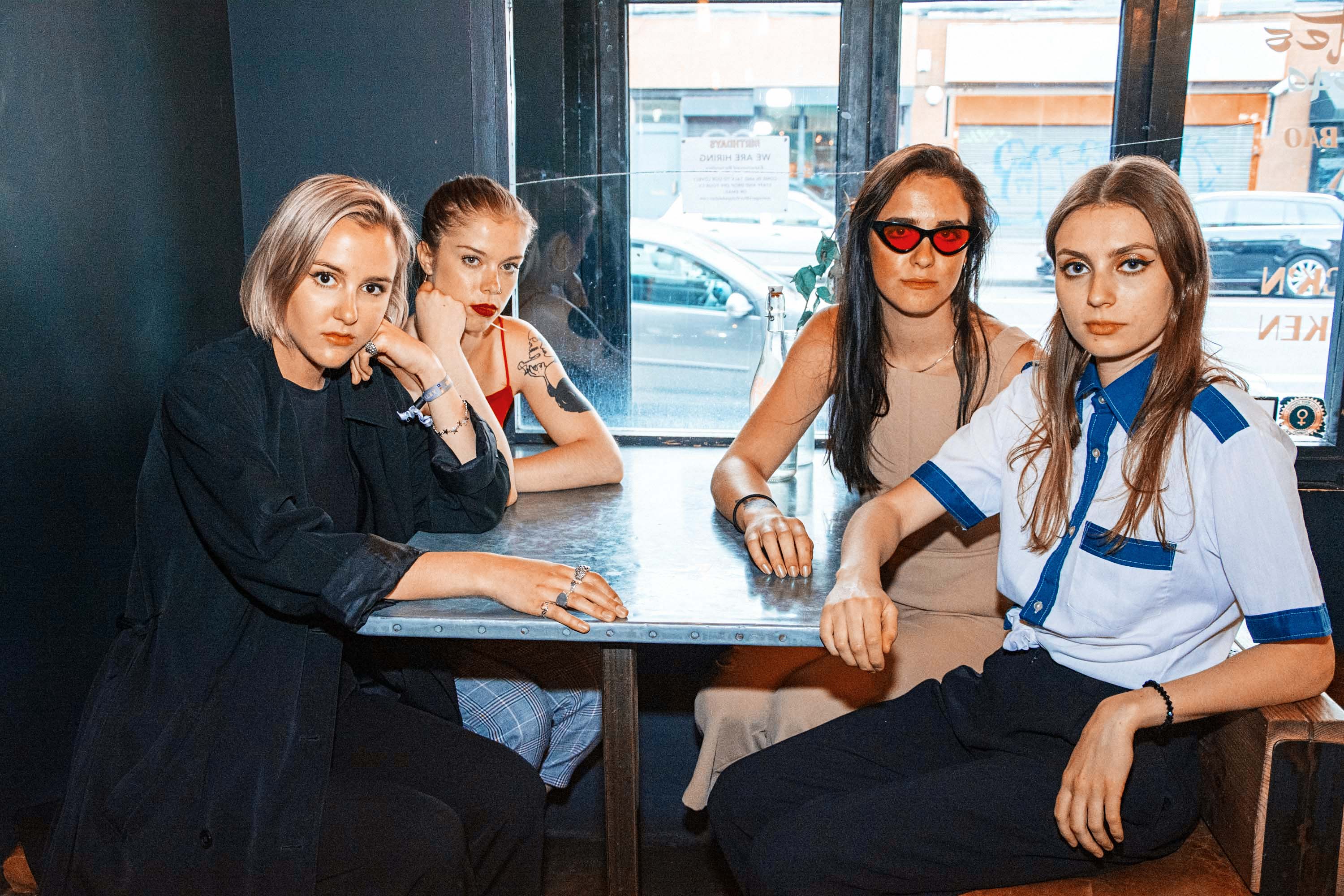 With bright sunlight coming through the windows, there’s no other band more suitable to be sat down with than The Beaches.

Fresh off the appearance at The Great Escape in Brighton back in May, I joined Toronto’s young quartet hours before their headline show at one of Dalston’s finest venues, Birthdays.

Rich in new and valuable experiences and with a debut album in their arsenal, the girls return to the UK after a five-year break with a whole new set of stories and more fearless than ever before. And as guitarist Kylie Miller emphasises: “This is our first headlining show in the UK ever as The Beaches.”

Comprising of sisters Jordan Miller on lead vocal duties and lead guitarist Kylie Miller, with drummer Eliza Enman McDaniel and keyboardist/guitarist Leandra Earl, The Beaches have gone a long way to achieve pure fulfilment in pursuit of their musical vision. They released self-titled EP in 2013, followed by the Heights EP one year later, before signing to Universal Music Canada and Island Records in 2016. Having shaped and mastered their ‘70s-tinged gritty sound, their debut album Late Show arrived in 2017 as a representation of their fresh take on glam-infused garage-y rock spectrum. Reaching this point however, had brought up some challenging matters to consider along the way.

“Editing was a real struggle for us because we had so many songs”, Kylie explains. “We’d been working on this album for five years. It was really challenging narrowing down what we wanted on the record and what we didn’t want.”

“For a long time when we were deciding between producers one of the biggest challenges was finding a way to capture our live raw energy on the record”, Jordan elaborates. “And we finally figured out that we just needed to record some of it live and play in the room together to give it that extra groovy live feel.”

“Also, I think another part of it was that we essentially grew up while we were writing and recording this record because we’d been working on it since the band started”, Kylie adds in. “We changed a lot as people and grew together as a band and again, as individuals, so that was another thing that we went through during this process.”

The journey they’d been on hugely determined the songs that landed on Late Show. When asked about dominant feelings captured on the album, the band’s gutsy character surfaces very quickly.

“I think pride”, Kylie exclaims. “Honestly, we were just so happy to finally have it out there and to have a debut record to our name that we’re so incredibly proud of. You know, we really are responsible for all the photos and all the writing. It was really our project in 100%”.

“I think this record is very energetic because it’s about being a young person in Toronto”, Jordan ponders. “It’s about these incredible experiences we’d had together over the past few years. You can really feel that in the music.”

Juno award-winning band (2018’s Breakthrough Group of the Year) are one of the brightest talents on Canadian music scene. With a vivid discussion touching gender-related themes in music community, the issue of women empowerment and girl power hasn’t been more important. In a male-dominated rock sphere, the expectations towards the young band are still a decisive factor when building up their image. As we delve deeper, their bold charisma and fierce spirit hardly go unnoticed.

“When we were just starting out our mentor told us that people were gonna expect us not to be very good and having negative associations with us because we were a girl band and because we were a young girl band playing rock music”, Jordan recalls. “Because of those negative assumptions, he said: ‘You have to be better musicians and more proficient players than the 40-year-old white guys that you are up against.’ We took that to heart and really strengthened our live performance and practised all the time. Now when people see us they’re super shocked. It’s because at the beginning we were so driven to be such good players.”

“In a way we have a secret weapon in our back pocket which is our live show because like Jordan said earlier, when people look us up or see a photo of us they have certain expectations”, Eliza continues. “And when we play live we usually end up blowing those expectations away. It’s an advantage.”

“In the beginning we heard a lot of ‘You’re pretty good for a girl band’ but now we just hear ‘You’re my favourite band’”, Leandra adds in.

“Also, the more women involved in the rock industry, the better it will be for everybody”, Kylie sums up. “Just having a better attitude about women in rock music.” 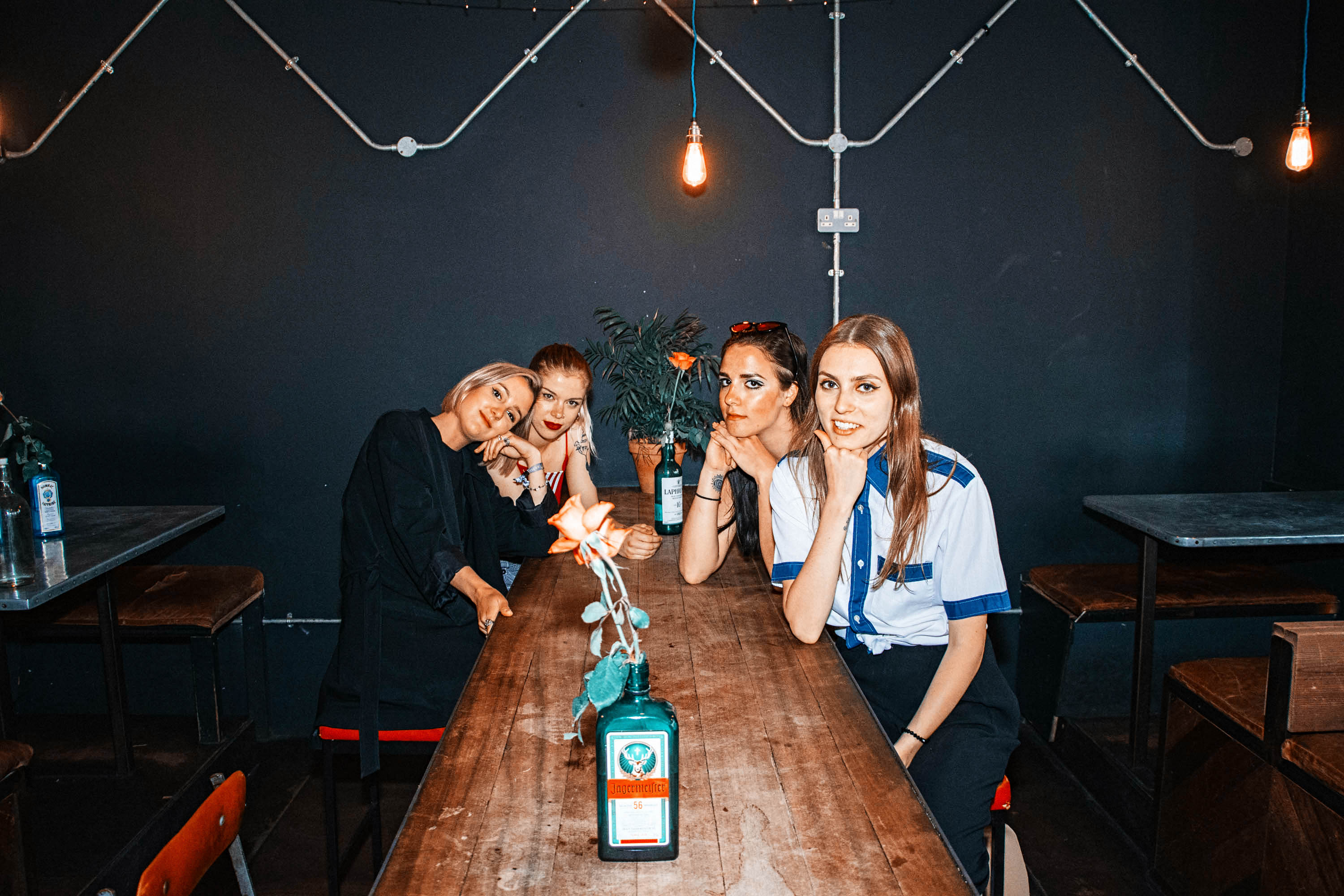 The more women involved in the rock industry, the better it will be for everybody

Hugely influenced by rock icons and Britpop pioneers, The Beaches proudly talk about their inspirations and role models in music.

“As a musician I really love Shirley Manson because I think that she is an incredibly talented songwriter and producer and she’s also been such a strong force in music industry”, Kylie states. “But then also Kurt Cobain is my hero as a guitar player.”

“My heroes are the Gallagher brothers from Oasis”, Jordan tells us but refuses to choose her favourite. “I can’t answer that! I like them both for different reasons and they both represent the fundamentals of a great band; Noel writes really good songs and Liam’s attitude and stage persona is so amazing. You won’t see anything like that, even if he’s a bit of a dick he’s great to watch on stage. That’s just who he is, he’s so likeable and silly and goofy and so cool. I love him and I love Nick Cave too. I think he’s a great performer and I take things from him whenever I can. He’s like a vampire god or something.”

“I like Haim just because they’re a really great live band and I think that’s one of our strengths”, Leandra ponders. “And Emily Haines too who helped produce our album along with Jimmy Shaw. She’s a badass woman who gets what she wants.”

“I try to emulate John Bonham when I play drums and I’d say he’s one of my main inspirations as a drummer”, Eliza says. “I love Led Zeppelin so much, they’re one of my favourite bands. I just love the way he sounds as a drummer.”

Oscillating between serious topics and a chat about British food and weather, as you will, The Beaches have got a few interesting tour-related stories to share. From the moments that felt rewarding and memorable, to the more bizarre and fortuitous situations.

“There were honestly a lot of moments on our last tour that were incredibly overwhelming and special”, Kylie ponders. “Just seeing people lined up down the block to get in to a show that’s on a Tuesday in the middle of Canada in a small city that you would not expect people to want to go and see a show on a Tuesday night…it was amazing. But I think it’s just really special for us to play shows all the time.”

“We played the show recently where the crowd was singing back the lyrics to one of our songs, ‘Money’, it was so loud, louder than any of our instruments”, Leandra recalls. “We all looked at each other at the same time thinking: ‘Is this really happening?’. Also, in the middle of one of our songs at The Great Escape some big security-guard-looking guy walked up beside me. I’m playing my keys and he’s just elbow to elbow with me. I was like ‘Hey…’, and he was like ‘Are you alright?’. The security was just looking at the crowd, making sure everything was okay, but he was there for two more songs just standing there like he didn’t know where he was. Then I put my guitar out and hit him like ‘Excuse me!’ but he wouldn’t leave so I made an eye contact with our tour manager ‘Can you get this dude off?’. So he went to get him off but he started screaming at him ‘I’ll punch you in the face, I’m looking for my friend’.”

“Just some random dude that got up on the stage with us just to look for his friend and never left”, Jordan adds in. “He looked like a bold Frankenstein”.

And it looks like there’s more to reveal from their trip to the seaside.

“There was a weird moment in Brighton”, Eliza tells. “We were there for five days and we ‘for real’ met two people in total so we invited both to the show. And those two people ended up being previously married and hadn’t spoken to each other for a year and a half. The first time they saw each other since the divorce was at our show. So that was really weird.” 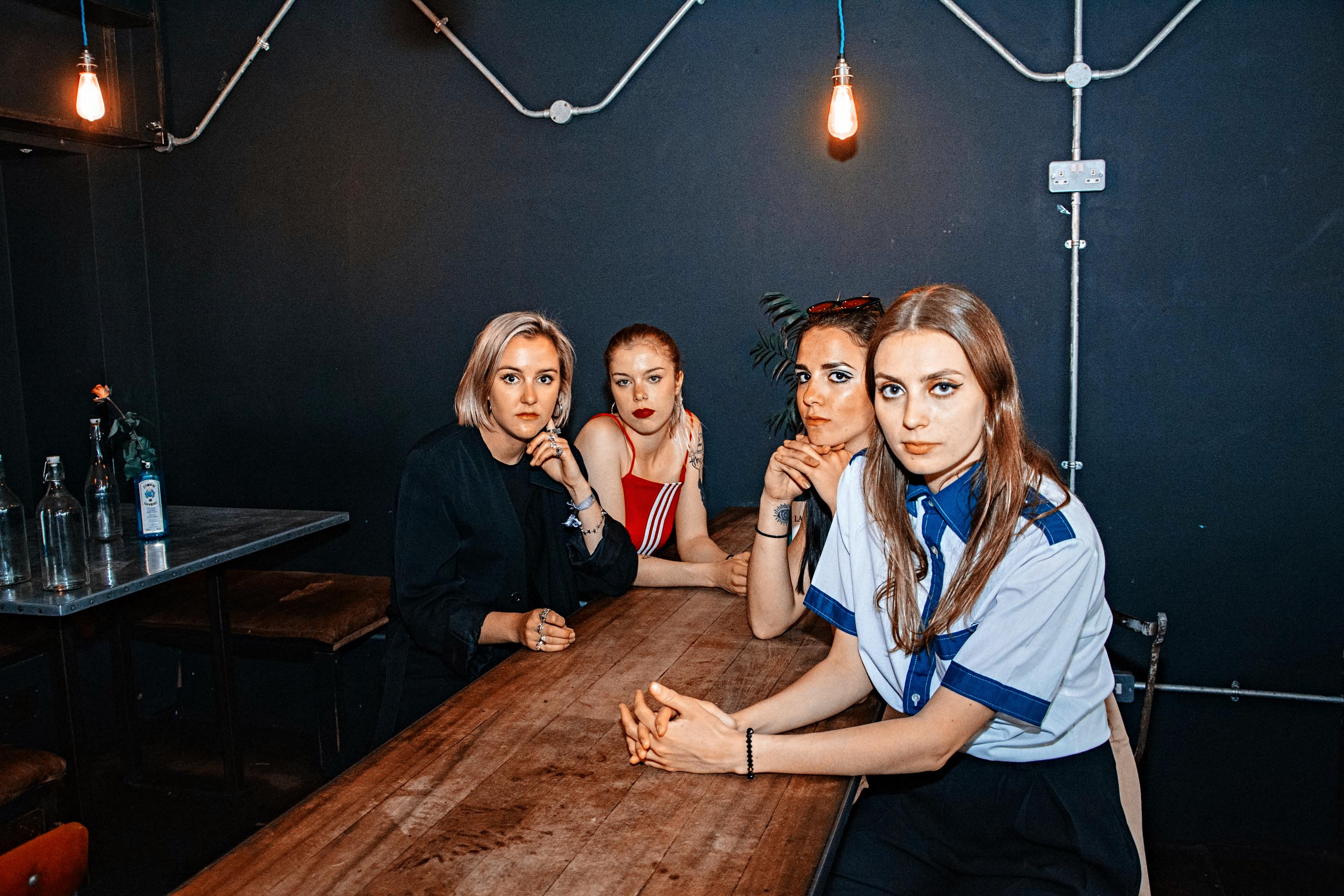 You have to push through the negativity out first

Being joined by a cool girl band, a small talk about celebrity crushes seems unavoidable. There’s a lot of love for Nick Jonas and Harry Styles, but also Viggo Mortensen, before I ask about their spirit animals.

“I’m gonna say turtle for me because they have really long necks and they’re really wise and thoughtful”, Jordan says. “And I would like to be wise and more thoughtful in the future.”

“I am a cat, a little moody a little sweet and fluffy”, we hear from Leandra.

“You’re nicer than most of cats”, Kylie points out.

“I don’t know what I would be.. maybe a sloth”, Kylie considers.

“I think Kylie would be like a monkey cause she’s a good climber”, Eliza suggests.

“True but maybe a platypus…it’s a mammal but it also lays eggs so it’s multi-talented”, Kylie says.

“Or a gold fish”, Leandra sums up.

Prepping for their London headline show and reflecting on their experiences, The Beaches give one advice to other young girl bands out there.

“I guess you have to push through the negativity out first”, Kylie says. “People have dumb expectations because they’ve been programmed that way but ultimately, if you love what you are doing and you keep at it, success will follow. That’s what happened to us. It’s our story.”

And it feels like their story has only just begun.