Embracing their transformation into a heavier, weirder, synth-punk band, Boston Manor continue their critique of today’s society with two new tracks: On A High Ledge and Ratking. One thing is certain about the GLUE era: Boston Manor are not shying away from hot-button issues. In the newly released On A High Ledge and Ratking, the band opens up the floor to discussions on male suicide and society’s inability to empathize and collaborate.

Of the two singles, On A High Ledge is the softer one in the sense that is eerie and understated. Rather than focusing on their vocals, Boston Manor created a distorted song utilizing layers of guitar, synth, and vocals to boldly capture the essence of the song. The lyrics bring to light the dangers of telling young boys to “man up” and the perils of toxic masculinity. The chaotic sounds of racket and noise in the chorus exemplify what it feels like to be at a point in your life where you have a million negative thoughts running through your mind and you just want to scream but you can’t, and even if you could, no one would take you seriously anyway.

According to vocalist, Henry Cox, the inspiration for On A High Ledge is deeply personal:

When I was seven years old I saw a man commit suicide by jumping off the bus station in Blackpool a few feet in front of me….The biggest killer of young men today is suicide. Obviously, mental health support in the UK & most of the world is not what it should be, and mental health issues affect everyone not just men. But I wanted to write a song dedicated to that man who died when I was young. I hope, as a society, we can teach little boys being born now that being sad is okay.

If you or someone you know is feeling vulnerable and needs someone to talk to please contact Samaritans in the UK on 116 123.

If you like heavier pop-punk and something that resembles previous Boston Manor tracks, Ratking should bring you joy. It still features distorted guitars, but with a heavier spin throughout the bridge and chorus. Ratking brings back the rock energy Boston Manor began with. You’ll be belting out the chorus line; “Don’t call me a freak, I’m just not feeling this.”

‘Ratking’ is about our inability to empathise with each other and work together as a collective. Even those who consider themselves tolerant should look at their inbuilt biases. I think our inability to show compassion to people who think differently to us is what is holding us back….We need to help each other to grow rather than trying to cancel, shout down, ridicule or attack each other.

Both On A High Ledge and Ratking solidify the direction Boston Manor are taking on this increasingly experimental record. GLUE is out May 1st via Pure Noise Records.

To celebrate the release, they’re hitting the road across the UK with Trophy Eyes. Catch them on the following dates: 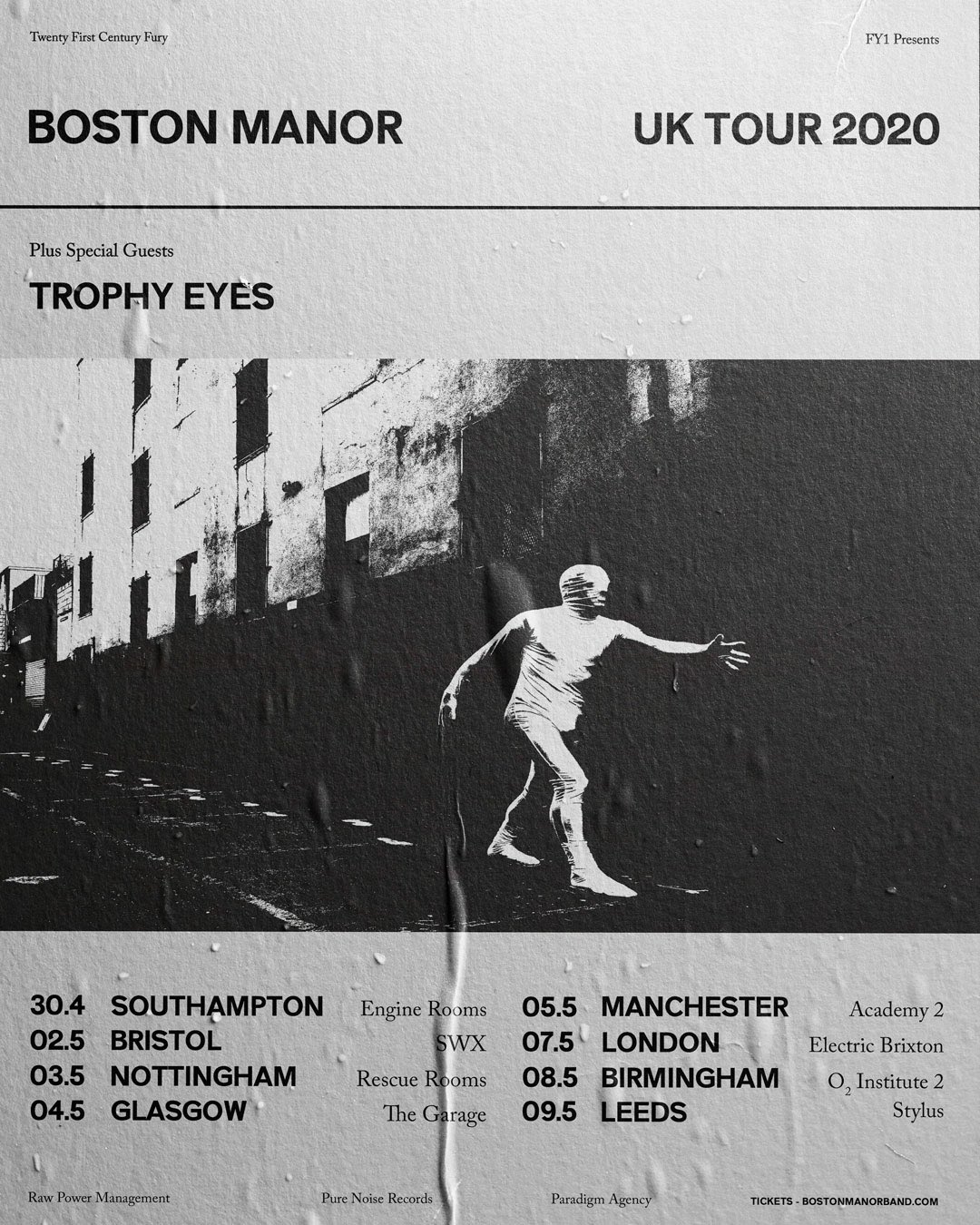