Foraging her way through the muddy waters of female indie singers, Lizzy Farrall’s first full-length album, Bruise, makes her mark in the crowded landscape through a variety of pop, rock, and electronica styles. 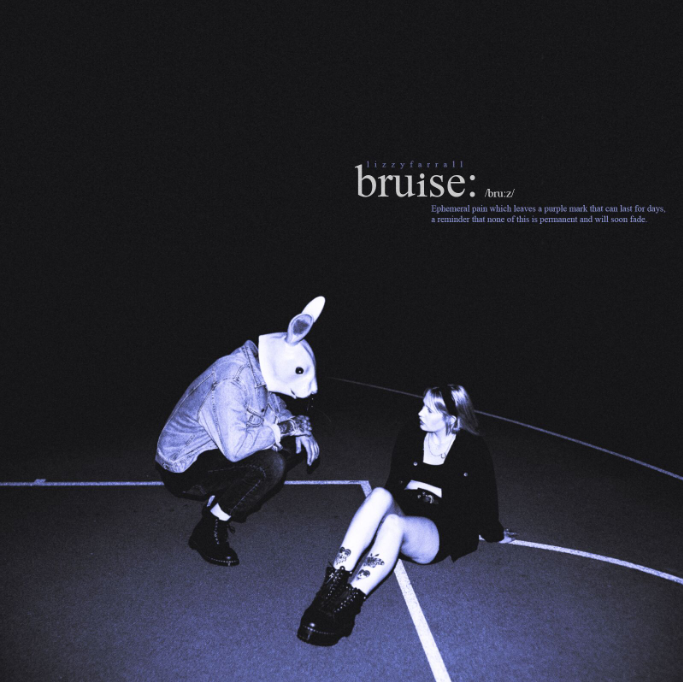 The 10-song record is deliberate in its execution, creating a record that sounds distinctly like Farrall and is enjoyable from start to finish.

Repetition is a key element on Bruise. It drives home the point of the songs and helps define Farrall’s style. We are introduced to this writing method from the very first song, Addict, which seems fitting giving the constant repetition in an addict’s life. The opening track alone features a blend of 80s synth, 2010s pop, and fast, catchy drums that showcases how much Farrall does not want to be pigeonholed. Gas Lighting slows it down in a more sensual, electronica groove, but maintains the importance of repetition in the chorus.

The only way to describe Yellow Paint is “relaxingly upbeat”. The beat and backing tracks are consistently there and even in tone and tempo. It’s the lyrics that make this song a whole mood. For those who will do anything to find happiness in their lives the chorus line “so I’ll drink some yellow paint to find some colour” hits harder the more times Farrall sings it. Plus, there’s a groovy sax solo creating some nifty film noir vibes.

The cheeky lyrics “I’d rather be killed than play another game with you” and “Would you make up your mind or pass me the goddamn knife? Before I stick it in my fucking eyes” are just two examples of what makes Games so fun and an absolute must listen. It is one of the standout tracks on the album. Everything about it – the lyrics, the energy, the attitude – is fantastic. It is youthful and bold. The whistling and plucky chords are sure to draw you into this tune about the stupid games people play in the dating world. Don’t sleep on Games.

Knocked For Six is so soft and twinkly with beautifully layered vocals during the verses but comes in with heavy, raw emotions in the distorted chorus. You can feel the importance this song has to Farrall, which is “about surviving the conflict between wanting to fit-in and knowing that the people you’re falling-in with aren’t healthy to be around.” Although it showcases heavier energy from many others on Bruise, the easy relatability to Knocked For Six helps to make this another must listen.

Back with the repetition, Okay acts almost like a mantra for those looking to survive on their own. Over and over Farrall says, “I don’t need nobody; I don’t need no one.” It can be hard to convince yourself you’re capable without anyone, and that is the importance of Okay. It is a short and sweet, moody and subtly wavy. Farrall’s sweet vocals are on full, emotional display on this track.

The closing track, Barbados, is a full-on dance party, closing the show with confetti and beach balls banger of a song. It is twangy indie pop gold and one of the album’s standout tracks. The contrast between heartbreaking lyrics like “Don’t invite me to your wedding day, because I’ve had ours planned out since the first date” and the cheery vibes serves as a strong reminder that not everything is as it seems. Check in on your friends.

With the final three drum beats in Barbados, the stories shared on Bruise are wrapped up decisively. The album is a good debut showing from Lizzy Farrall. Many of these songs will rightfully find their home on indie playlists, but there’s a bit of everything on this album for fans of other genres.

That said, there is absolutely room for growth. While the repetition serves its purpose, it does tend to fall flat after a while no matter how it is jazzed up. The songs that had more “traditional” choruses tended to be stronger showings. Bruise is a good start, but it is apparent that Lizzy Farrall is capable of even more.