“Be kinder to yourself and to others. Talk to people more and help each other because we will benefit together”, Boston Manor talk to us about living in lockdown, and how it’s time for us to stop being complacent with the state of the world. 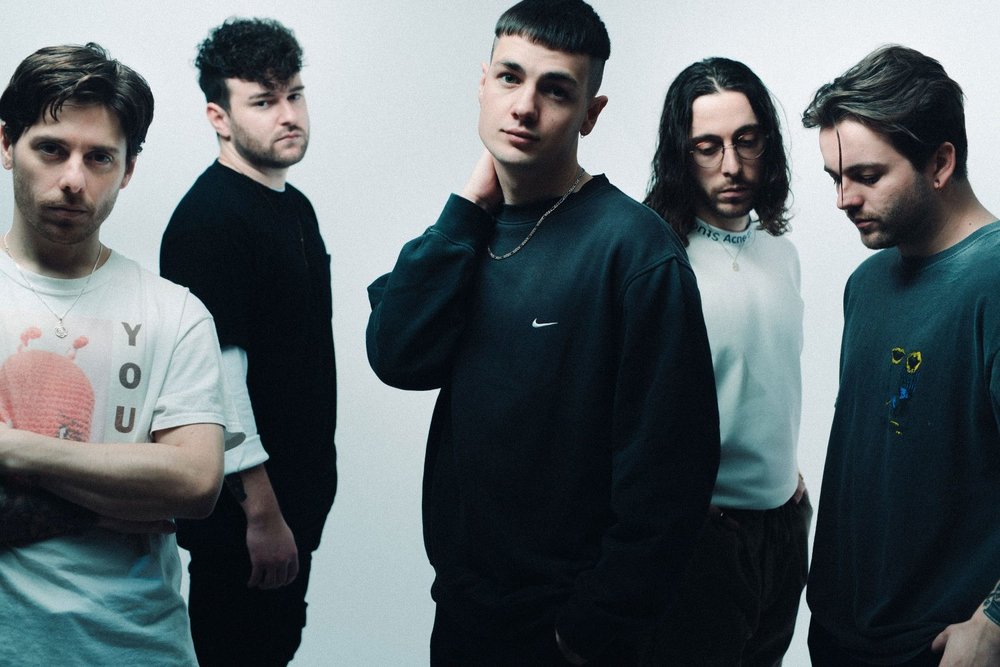 The world as we know it is changing right in front of our eyes. Shaken by a pandemic and gripped by problems of inequality and injustice, it’s easy to see how one can quickly fall into a state of despair about the way that things are. Yet there can be a resounding strength to be found in this hopelessness and anger, and that is exactly what Boston Manor have channelled in their blistering new album GLUE. Instead of sitting with these strong feelings of uneasiness, they have turned it into a spitting attack that paves the way for an angry generation who may otherwise feel unheard and ignored.

Grounded by a confidence to express their thoughts, there’s an unmistakable passion driving the record, and vocalist Henry Cox picks up on this by stating that GLUE “exists, that’s the whole point of it. To create a body of work that challenges you & that you love to play & listen to.” GLUE sees Boston Manor finally becoming the band they wanted to be, but this was not a direction that was clear from the outset. Henry confesses, “I don’t think we could’ve ever conceived that this was the direction we would’ve taken. It’s really cool though.” Reflecting upon the journey, Henry muses, “it’s kind of the same about growing up – often you look back at yourself and wonder what the kid version of you would think of you. I think the biggest learning curve for us has been getting out of our own way. We overthink things & we get kind of stuck in our heads. In terms of creative decision making I wish I’d been spending more time being instinctive rather than analytical.”

Although preceding album Welcome To The Neighbourhood was more inspired by the issues prevalent in the band’s hometown of Blackpool, similar frustrations arise in GLUE despite its more global perspective. One such recurrent theme centres around economic inequality and the widening wealth gap, which Henry admits, “is becoming more evident everywhere you go.” It’s an issue that transcends borders and impacts every level, and Henry expands, “Blackpool has been quite a poor town but there’s still really nice areas only about 20 minutes away with multi million pound houses. I see that in every city or town we go to. You see some very deprived places but then there’s a lot of wealth just down the street. I think we’ve let a lot of people fall too far & we haven’t protected our most vulnerable people. I know there’s a lot of reasons for why that wealth gap exists but I think it’s just a sign of a lot of economical factors going unchecked for too long. You can’t let things slide that far.”

The problem of austerity is not the only issue being called to attention in the album; another key theme that surfaces is that of mental health, both in terms of its personal effects and its societal impacts. Considering the significance that it has upon everyone’s life, one would expect it to be more widely addressed, yet Henry is quick to point out that “mental health is something that isn’t being invested in nearly enough.” He continues, “the repercussions for our way of living with phones & social media and such are going to be massive. I don’t know what can be done in all honesty. I like to think it’ll mean we’ll vote for more sensible governments but it might all be too late by then.”

From a more personal standpoint, Henry is candid about his own mental health struggles, particularly in tracks like Stuck In The Mud and Only1, which provide a brutally honest insight into the thoughts that torment his mind. The topic feels particularly timely, as there’s a global increase in loneliness brought on by the distancing measures imposed because of coronavirus, and Henry acknowledges that “it’s been hard at times; it’s so different to the way I have always lived my life; being on tour etc.” He shares his advice on how he has been coping so far, which includes “being honest about how I’m feeling, telling my girlfriend if I’m having a bad day, doing something that makes me feel good. I’ve started exercising more which has been sick also.” He also mentions, “I’ve barely been on my phone at all since this lockdown happened”, although this may be to do with a more general apprehension towards technology, the sentiment of which is expressed in tracks such as 1’s & 0’s.

Without discounting the utility and necessity of technology in modern life, one would be hard-pressed to argue that it has not contributed to a trend towards higher levels of fake news. Henry captures this point by pointing out that “we do need to be informed about the world we live in. I would never tell people to completely turn off the news. But I think it gets weird when people are loyal to one output or network. That’s like only ever listening to one person, it doesn’t make sense. I think it’s more about the constant back and forth on Twitter about it after the thing happens and then everyone’s debating the thing. That’s when it gets very 2020 and boring.” 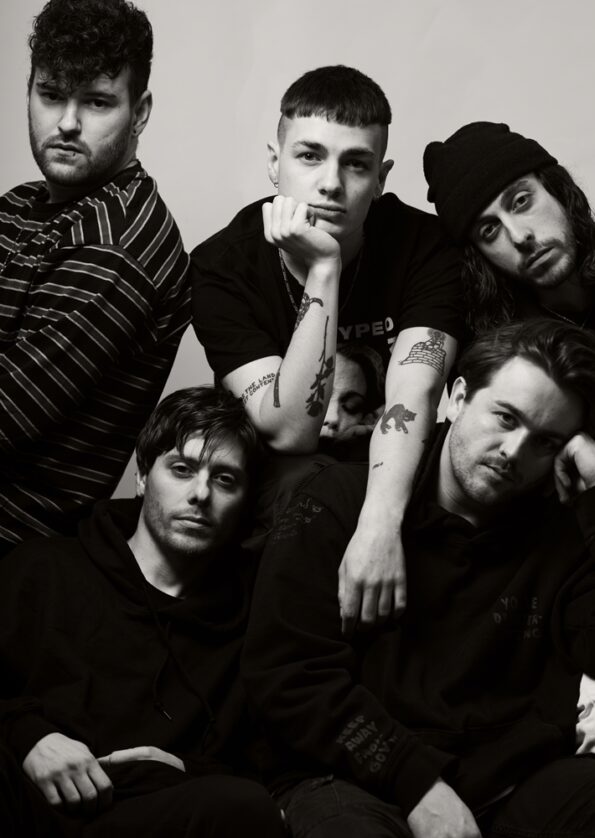 Another problem that is heavily-linked to technological advances is an increasing trend of disposability within our culture, and Henry ponders, “I would assume it is from the instant gratification culture we’ve built up over the years. You can get everything free & instantly on the internet, you can order anything to your door for the same day.” It’s not all negative though, and Henry points out that “in the case of music it just means that everyone is consuming so much more of it. So you have to be someone’s favourite thing ever, otherwise if you’re not they can just flick onto something else. It’s kind of cool, I guess it means you need to up your game. But it does mean you get lots of people doing mad things to cut through the static.” He also acknowledges the downside that “the dangers of making music that is lyrically current is it can have a tendency to look a bit crap ten years later. Hopefully that won’t be the case with this record.”

Maintaining people’s attention can have a more insidious facet though, especially with the expectation to access the personal lives of the public figures that we connect with. Henry touches upon this privacy encroachment, commenting, “I think it’s a weird thing that’s happening now where a musician has to also be like an entertainer or a tv presenter on the internet. It’s probably just me being old but I just kind of miss the mystery of not seeing everything that people do. I’m not saying people can’t be themselves; fuck it – post whatever you like. I would never tell you what to do. But as an artist, often that culture can get put on you; like you’re expected to be someone else to look cool on the internet. I just think it’s boring.”

It’s hard to give a shit if everything is ‘fine’

One of the aims that the band set out to achieve with GLUE was to get people feeling riled up and angry enough to start making a change. Henry describes the passivity as a state of being ‘comfortably numb’ in Everything Is Ordinary, which he attributes to the bombardment of information as he notes, “I think in the past five years with all of the distractions of the world & our constant over stimulation it’s become easy to shrink away from the world & just kind of drink the koolaid and get on with things. It’s hard to give a shit if everything is ‘fine’.”

Although the reality of social distancing and lockdown in light of COVID-19 means that taking to the streets to express discontent might be more difficult, this does not mean that people are justified in delaying the actions that the band had hoped to incite with the record. Right now, for Henry, “the bare minimum people can do is properly isolate themselves; follow guidelines & be responsible. That’s what every single person should be doing right now. I hope people take this time to appreciate what they have & enjoy time with their loved ones or otherwise call them & talk more.”

This will be a particularly important message to bear in mind in the aftermath of the pandemic, which Henry thinks has fostered a “mindset of ‘anyone could be carrying a disease that could make me very ill’ and it’s made us all a bit suspicious of one another. Like when you’re in the supermarket and someone comes a bit too close to you to get something off a shelf you’re near. It sucks cause they’re just trying to get the thing they need, but you’re kind of at the mercy of whether or not they’re responsible & then you get annoyed at them. I think it’ll take some time for us all to get comfortable with one another again.” However, this goes against the very core message that GLUE seeks to promote, and Henry wraps up the gist of it by concluding that if people could only take away one message from the album, it would be “be kinder to yourself and to others. Talk to people more & help each other because we will benefit together.”

Despite everything that life may throw, the experience of it is shared and we can make it out of the hardships together, and Boston Manor exemplify how to usher in optimism and hopefulness from a seemingly bleak situation. So get riled up, and take to the streets when it is safe to do so – the future is yours to hold.