Artist Of The Week // KYNSY

Delve into the world of make-believe with Kynsy’s debut EP, as she explores our pursuit of Things That Don’t Exist. 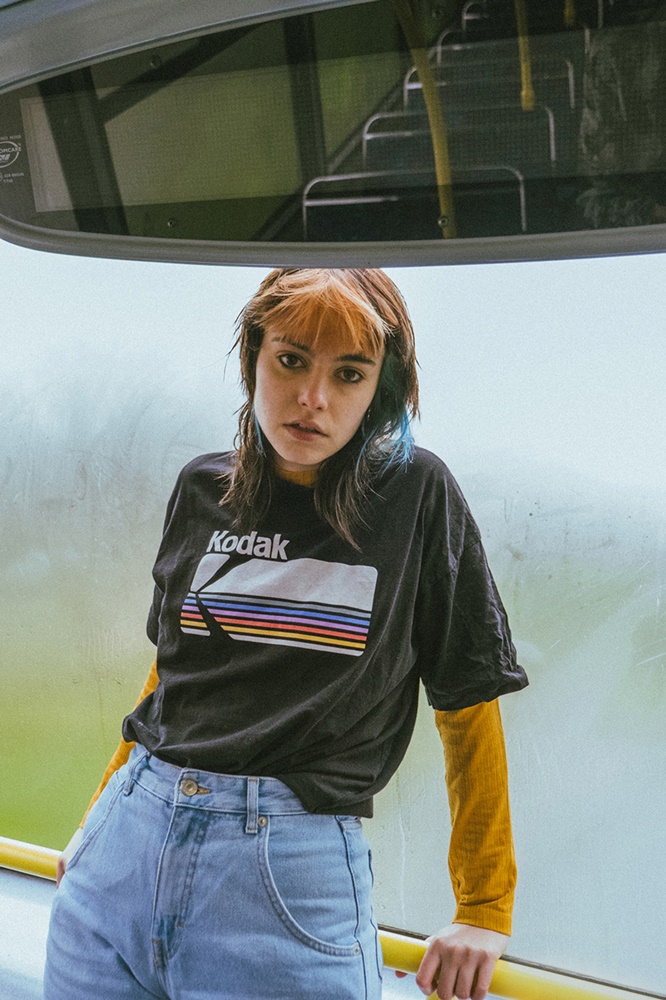 Our fascination with chasing after non-existent ideals and pursuing abstract concepts is nothing novel but they seem to have reached a new height in the current day and age as we are inundated with comparisons on social media, fabricated advertisements, and never-ending suggestions of how we can improve our lives. It’s something that Kynsy picks up upon and scrutinises in her debut EP Things That Don’t Exist, a collection of hazy and electro-noir sonics to acutely soundtrack this phenomenon.

The 23-year-old multi-instrumentalist, songwriter, and producer unveils her intoxicating sound as she shares a collection of soaring melodies and ringing guitars that will wash over you in a wave of euphoria. Yet there lies a more nuanced urgency, in the likes of the syncopated bass in Happiness Isn’t A Fixed State and the yearning vocals in Elephant In The Room, hinting at the more complex emotions that underpin the work.

Explaining her inspirations for the EP, Kynsy says:

I found there to be a juxtaposition in the positive and negative aspects of things that don’t exist; how having hope can change people’s lives for the better, how art is made from things that were previously non-existent and how these life fulfilling aspects as well as the things that can derail us are constantly fighting each other in our thought processes.

This EP is a dialogue between those positive and negative thoughts and emotions. I wanted the music to create a world of freedom, hope and playfulness while the lyrics focus on the struggle of fighting, running and coming to terms with all of the good and bad we find in things that don’t exist.

Transfixed by the gripping melodies that have wormed their way into our brains, we spoke with Kynsy more as she begins this exciting new chapter of her musical journey.

I have a few but recently “Ego is the enemy” is something I’ve been saying to myself.

I believe that ego is something that is so destructive to ourselves and our creative paths. If our ego is inflated, it can distort your sense of reality and affect our art without us even realising. I’ve always had issues with my ego and I have to remember to not let gratification get the better of me, especially now with short term gratification from social media.

Dark blue. I feel like my sound is a nice collage of loads of different bright and dark sounds, in my head I feel like dark blue is a good colour which is fundamentally happy or lives in the world of the bright colours, but yet has a hint of darkness to it. I think my music is like that.

Are there any behind-the-scenes stories of recording the EP that you can share with us?

The guitar solo at the end of Cold Blue Light was something unplanned my bass player did when I had gone to the shops to buy a tuna sandwich, I came back from the shops and he was messing about with all these sounds, he’s a guitarist too so he knew how to get some weird sound out of my pedals. I ended up really liking the solo and it’s one of my favourite things on the EP.

Were there any surprises, whether pleasant or unpleasant, that you came across during the process?

Dog Videos was a lockdown recording which I would have rather not have been. I had to get everyone to email me stems and then busted my ass trying to make it sound like an actual studio recording on my tiny MacBook Air. The upside to that was it was very easy to casually message a friend and ask could they put horns on it.

The horns was a very last minute idea, which is also one of my favourite parts of the EP. If it was all done in person, I don’t know if the horns thing would have felt like an easy thing to get done, I might have thrown away the idea.

You mention that some of the inspiration for the EP comes from the idea that we chase after things that don’t exist; what’s something that you used to chase before finding out it wasn’t real? What helped you break away from the illusion?

One of the things I give a nod to in the EP is that illusion of happiness being this continuous feeling or emotion that you receive in life if you play your cards right.. As if you can “out run” bad days if you had a good boyfriend, lived in a better place or had some sort of success.. happiness will always be there. Which is complete bullshit.

I think what helped with breaking away from those ideals was just getting older and learning from friends who have been successful and seeing that the success which they thought would “complete” them or something, didn’t fulfill them in the end. It was also learning about the power of perspective and gratitude and that it’s more what you choose to see and working on the inner world which makes you a more fulfilled person.

Is there anything that doesn’t exist but you wish existed?

There’s so much wrong with social media and the algorithms which have been created which are seriously negatively affecting our minds and society. I wish there was more thinking and action towards creating mindful tech which isn’t engaging with the use of psychological manipulation.

Dog Videos discusses our draw to social media and the tendency for us to fall into the rabbit hole of it; what’s been the strangest YouTube/social media rabbit hole you’ve fallen into?

Videos of model construction sites doing miniature construction which last 40 minutes. It is actually quite soothing.

What has been the most fulfilling aspect of producing the EP?

I had so much fun in the summer in the studio when this EP was made with my band and co-producer, I feel like that was the best part, having fun with friends and making something to be proud of.

Music is the thing that keeps me sane. I’m not myself when I don’t write or produce stuff. It’s the road to happiness for me.