SXSW 2021 introduced the world to many new, talented artists through an innovative, digitally-connected festival. Here are some of our favorites of SXSW 2021. 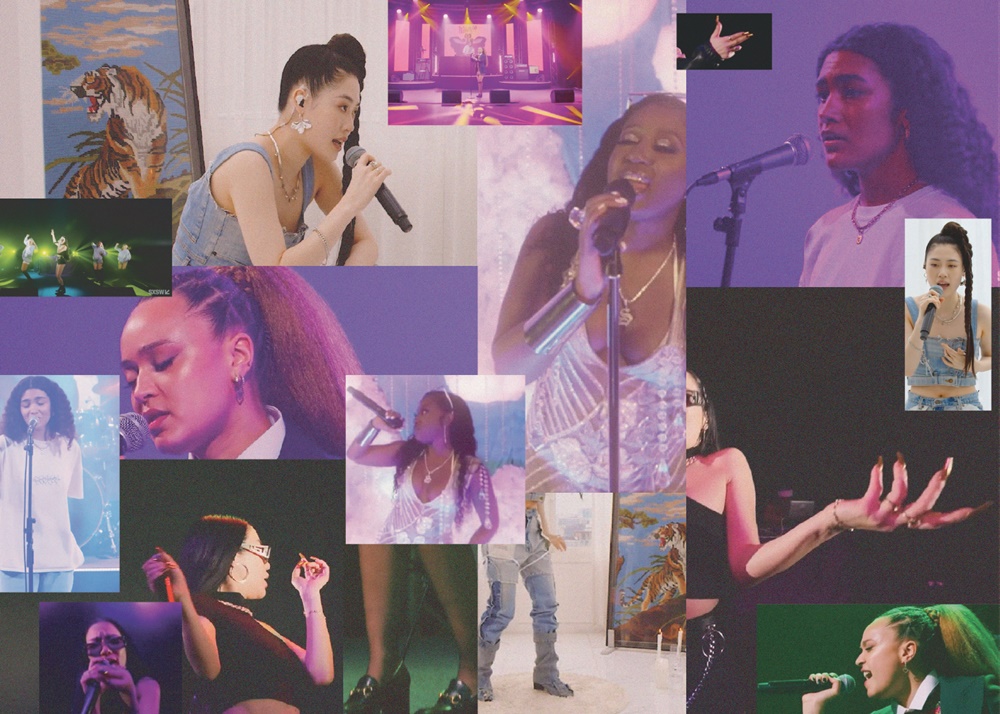 This year’s SXSW 2021 festival was a cybernetic escape as the Austin, Texas music, film and tech festival went virtual for the first time. The new layout gave the opportunity for isolated music-lovers to connect through pre-recorded sets from the comfort of their quarantined quarters. SXSW Online provided performances and easy access for music discovery with nearly 300 artists performing over a five-day period. The GIG GOER team takes a look back on the five sets that blew us away, highlighting both buzzing performances and fresh, new faces who left us satisfyingly surprised. Discover the artists below.

Connie Constance was an independent guru on the British Music Embassy stage, where she took center stage with support from only one DJ encouraging her in the background. She wore posh school attire that was suited with a Gucci blazer and an eclectic plaid dress complete with simple black stockings. Her hair was in a long, thick ponytail that flew effortlessly through each songful dance. We were blown away by her barbed vocals filled with smooth raspy undertones and a mutable, charged technique. She mixed and matched blunted vowels and consonants to bring driven lyrics to the forefront. In the performance of song Monty Python, she mirrored fun, art-punk attitude with choreographed arm movements and catchy “woohoo!” chants while doing it all with an effortless smirk. Connie Constance is a confident performer that is filling out a higher purpose – setting a new standard to the term, “genre-bending.” The vocal depth of her orotund, soul melodies resonating through a thick and full British accent left us in awe.

The Wednesday highlight, hip-hop artist Yung Baby Tate, performed an engaging set, delivering each hit track with high energy and self-awareness. Her set design was one of the best throughout the virtual festival. We were transported to a different realm – a hybrid of a sensual candy land and a 90s infused pop music video. “My name is Yung Baby Tate, but you already know who I am,” was her humble introduction before performing her viral bops: hot girl mantra I Am, soulful electro-pop jam Bounce, and edgy mystic Rainbow Cadillac. Through the fluffy clouds, her smooth sonic palette matched her playful harmonies and hard monologues. Her vocal talents, musical production and lyrical writing are only a few reasons why Yung Baby Tate is one to look out for; she is just getting started. The full set was dressed as an intimate homage to self-acceptance, ending on a new track Me First from her upcoming After The Rain deluxe EP.

Olivia Dean gave an absolute knockout performance on the third day of the British Music Embassy showcase. A rising and fresh new shining star in the singer/songwriter space, there’s no way that Dean isn’t set for a whirlwind year. Despite being fans for some time before SXSW, her effortless onstage demeanor and honey-like vocals immediately stunned us. The humble power that she exudes just by “being” is magnetic. She performed fan favorite The Hardest Part and delighted us with a playful unreleased single Be My Own Boyfriend. Flooded in a blueish purple light and dressed in an oversized tee and jeans, Dean’s simplicity in stage design allowed for her vocals to shine through. There was something in her performance – a delicate addition of just the right amount of emotion – that gave her presence a profound genuineness that was unmatched by other SXSW performers. We were utterly captivated, start to finish.

Awich was an impromptu highlight for Friday. She arrived on stage beautified in black with fierce, hooded dancers surrounding her performance. The rap-poet chose grace through her set starting with the steady flow of Whoru? to pop focused love track Bad Bad, embracing the choreographed dancing, hyped energy and evolved change of pace. Awich’s robust vocals and intense energy proved to us that she is a national hip-hop artist and no one can stop her erupted momentum. With animated passion filling the stage, we forgot about the absence of an audience and virtuality of the production, for one quick second. That’s what a qualified, versatile performer does – creates a show where we can escape reality to bask in warm vocals, lights and sonic sensations, leaving the crowd in euphoric chaos. We applaud Awich for doing just that; she is one musician we are excited to see in-person, in the near future.

As one of GIG GOER’s Ones to Watch for SXSW 2021, DeVita did not disappoint. Her stunning performance was just what we needed to close out the week. Set in a clean, white room with a few well-placed props – the picture of the tiger was our favorite – DeVita gave off elegance and decadence. Her voice is perfectly suited for pop: bright, rich and not all-too-dissimilar from powerhouses like Ariana Grande, yet it is wildly unique and there’s a fullness to it that is all her own. To start her set, she gave a gorgeous rendition of Show Me off of her 2020 EP CRÈME and reached her peak during unreleased track Song 4 U. As a relative newcomer to the music industry and with an already impressive list of collaborations under her belt, SXSW is sure to be a stepping stone in a long and successful career. We can’t wait to see what she does next.