With a weather forecast as dark as their souls, metal and rock fans headed to Castle Donington last week for another edition of Download. 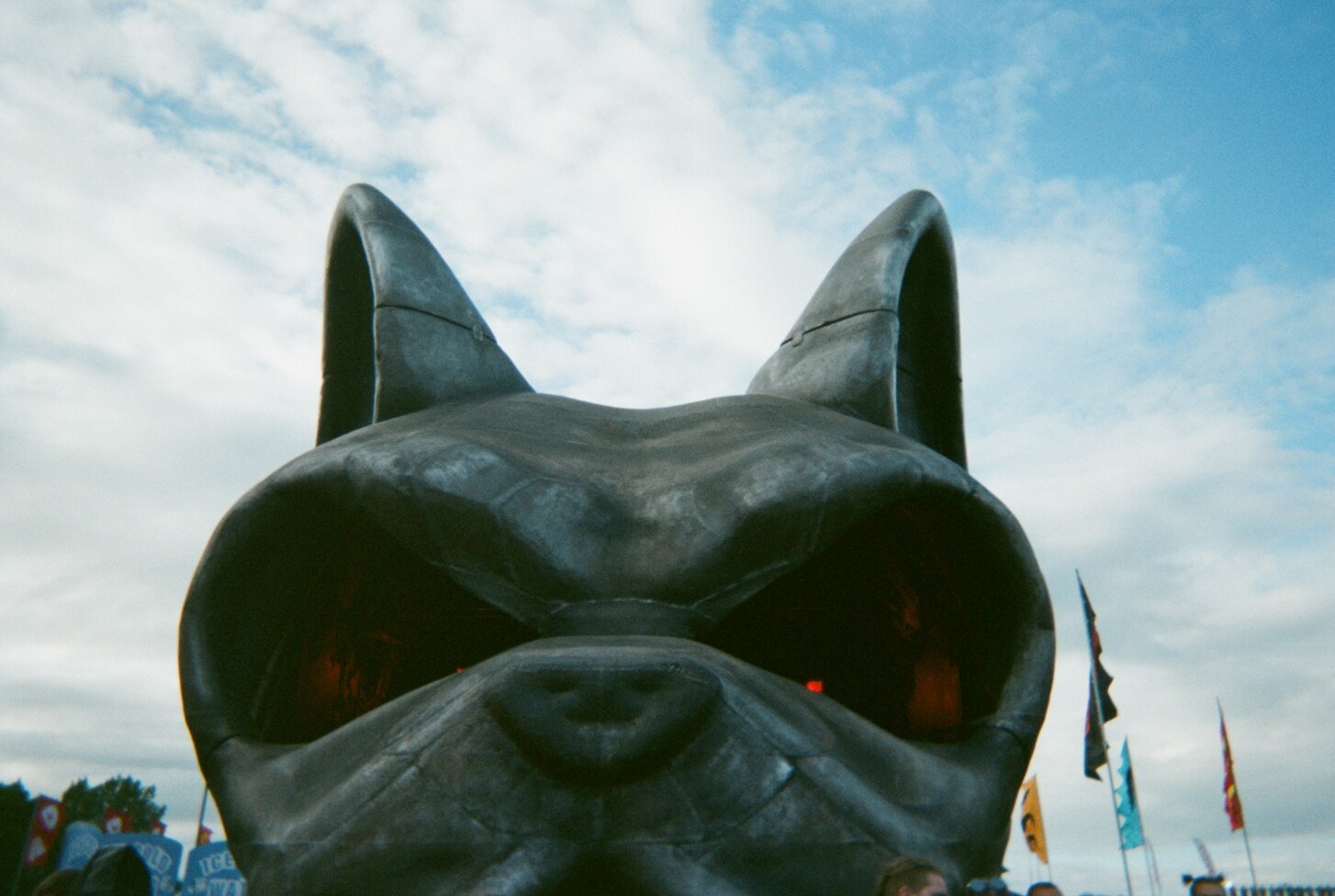 Aptly nicknamed Drownload, the rain had been haunting the site for days before the start of the actual festivities, and both the campsite and arena were drenched. Armed with a pair of wellies, a disposable camera, and a thirst for music, GIG GOER headed out to catch some of their favourites both on stage and backstage throughout the weekend, documenting an old fashioned festival diary and accumulating a top 10 of acts from three days of incredible gigs.

Responsible for arguably one of the best pop punk albums of 2018 with Living Proof, and two other successful albums under their belts, State Champs have an amazing foundation for a great show. They kick off with Criminal and continue to throw back to both old bangers and new hits throughout the show. The crowd is on their side, singing loudly, but the stage set up isn’t. State Champs are best enjoyed in a sweaty no-barrier venue, and on the Zippo Encore stage the distance shows. Perhaps a later slot on the Avalanche stage would’ve captured the State Champs vibe better.

The Manchester band has truly earned their spot on the Download stage, despite having only just released their EP. They’ve accumulated a small but excited fanbase and for the fairly unknown band, a surprising amount of people are able to sing along. Their message of their shows being a safe space where everyone can be who the fuck they want seems to resonate with the audience and Han’s slightly awkward IDGAF attitude combined with their well balanced dual vocals make their performance one to remember. 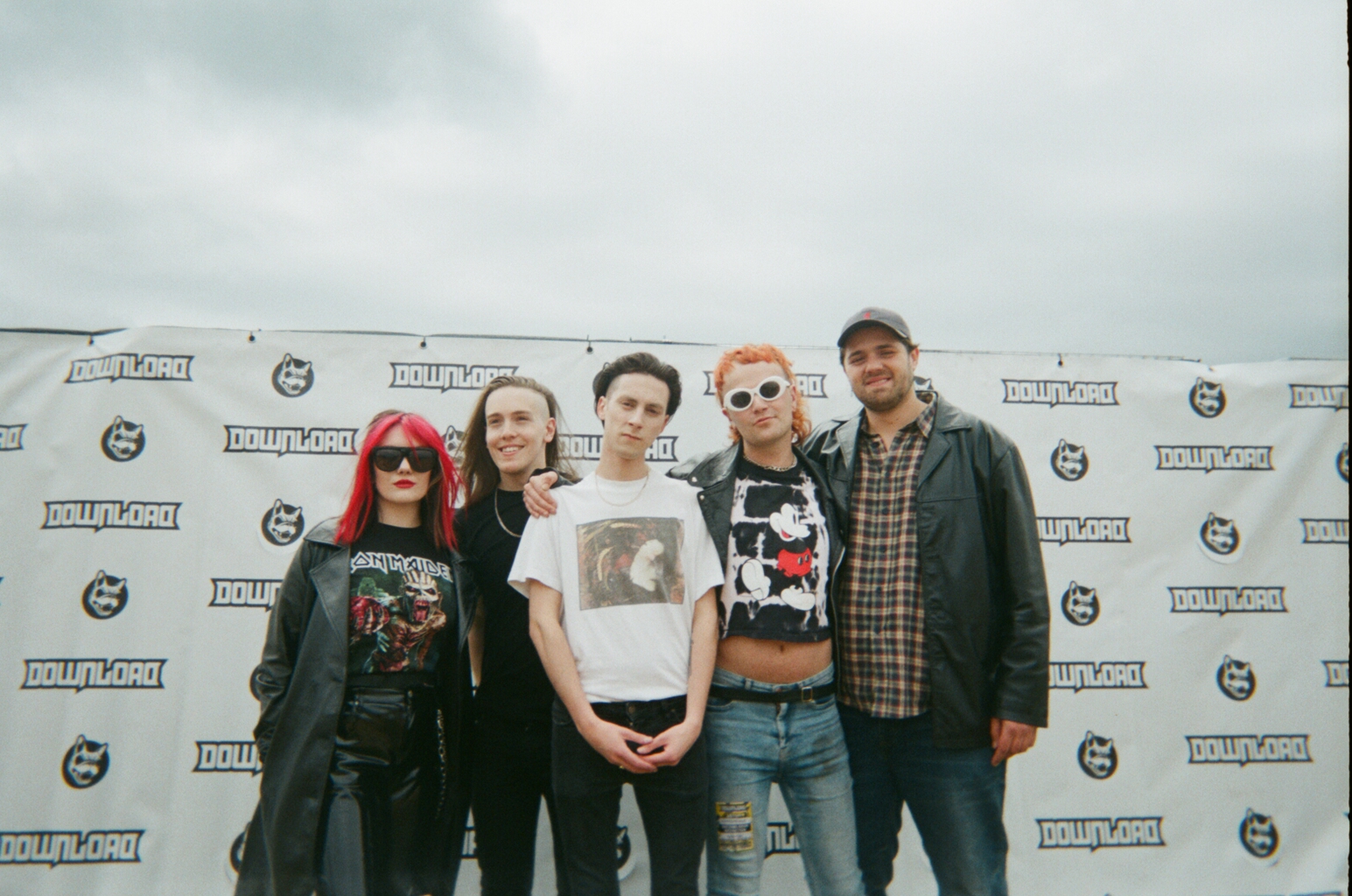 Playing a fairly early slot on the Dogtooth Stage, Queen Zee are an interesting accumulation of artists, to say the least. The band has taken it upon themselves to put some queer energy back into punk. Meeting them backstage, Zee radiates the softest, kindest energy, but as soon as the band takes the stage, they’re engaging, they’re bold, they’re loud. And not only does Queen Zee have an explosive voice: the band’s female vocalist blows them all out of the water. Truly a band to watch. 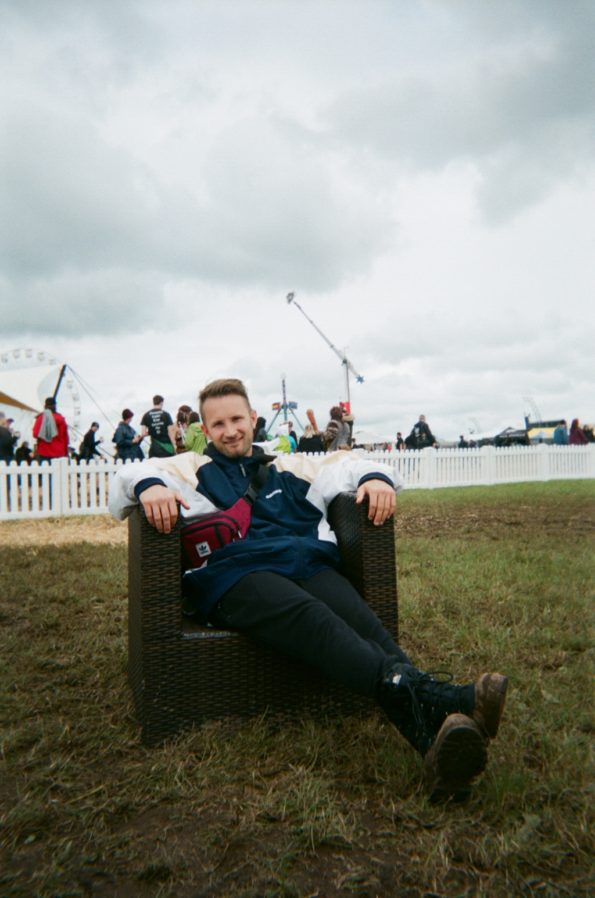 Eastbourne band ROAM is a great example of explosive pop-punk. Vocalist Alex Costello is small in posture, but massive is his stage presence. He strikes a pose for our camera backstage before heading of to their gig, and going from off to on stage, Alex transforms ROAM into the force it is. In between songs there is time for banter, publicly calling out men peeing against the fence just outside the tent, much to their embarrassment. During their songs, the moshpits take up half the tent, making a lasting impression on an already strong Avalanche Stage Saturday line-up.

Alternative rock legends The Smashing Pumpkins are one of those bands who have been around since the 80s, and everyone should see them at least once if they get the chance. Despite singer Billy Corgan’s chaotic energy, a Smashing Pumpkins show is so well thought out and stands like a house. Their most popular songs are interchanged with covers and more obscure ballads. Banger Bullet With Butterfly Wings is sang at the top of everyone’s lungs, and greatest hit 1979 is controversially left out. The combination of a gorgeous stage set up, clean guitar playing, and Corgan’s deep signature voice, makes this performance one for the books. 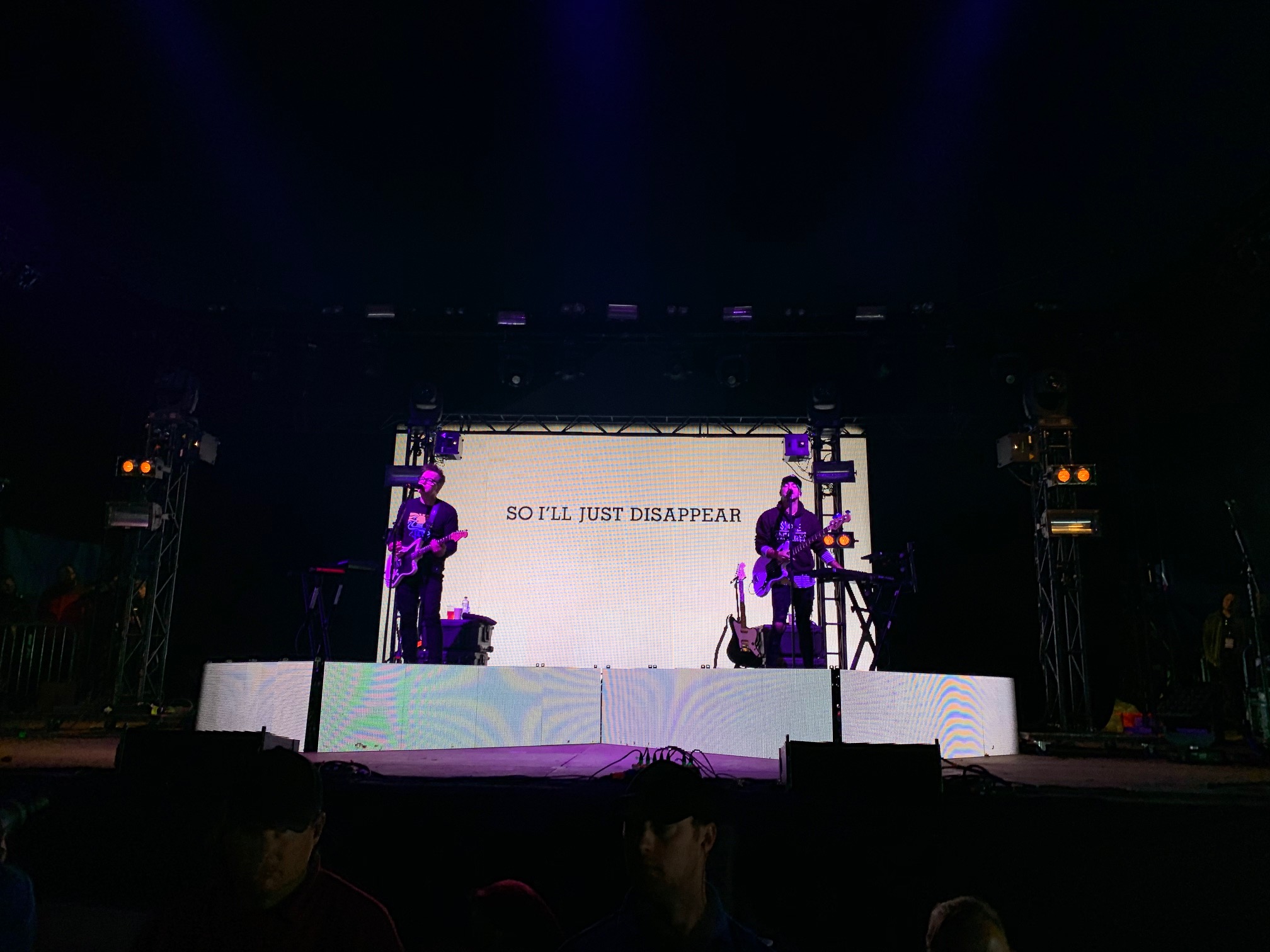 Alex Gaskarth (All Time Low) and Mark Hoppus (Blink-182) have the honour of closing the Avalanche stage on the Saturday and believe us, that they do. Only having started their side project this year, the duo have taken their show to the UK only once before. Describing their style as trash pop, they play their EP in full and add two unreleased singles and a cover. Gaskarth and Hoppus’ on stage banter is exactly the silly kind you expect from these two. Ripping into each other with jokes, spontaneously inviting unicorn onesie clad men on stage, and disarming the audience with their charm, they win the tent over in no time. “I’ve been doing this for decades” Hoppus calls out. “The jokes were never good, and they will never be good.” Besides banter and charm, the two bring a musical quality to the stage that comes with years of experience.  Simple Creatures are entertaining in every sense of the word, and take up a well deserved middle spot in our list.

Me First and the Gimme Gimmes

Me First close the Avalanche stage on Friday, racking up a solid crowd despite clashes and an overlap with Def Leppard. A supergroup consisting of members of amongst others Lagwagon, NOFX and Bad Religion, the show promises to be a good one. The audience gets warmed up by the pop songs playing between bands, singing along at full volume to bangers like No Scrubs and Sexual Healing. It bodes well that this gets the audience going, because Me First thrive on their quirky covers and silly matching outfits. From Cher to Willie Nelson, the band covers a wide array of genres, screaming one-liners like “we’re putting the c*nt back in country” to roaring laughter from the audience. Me First and The Gimme Gimmes play the kind of gig that you can walk into by accident and feel like you’re stepping in a warm bath, guaranteeing a good time. 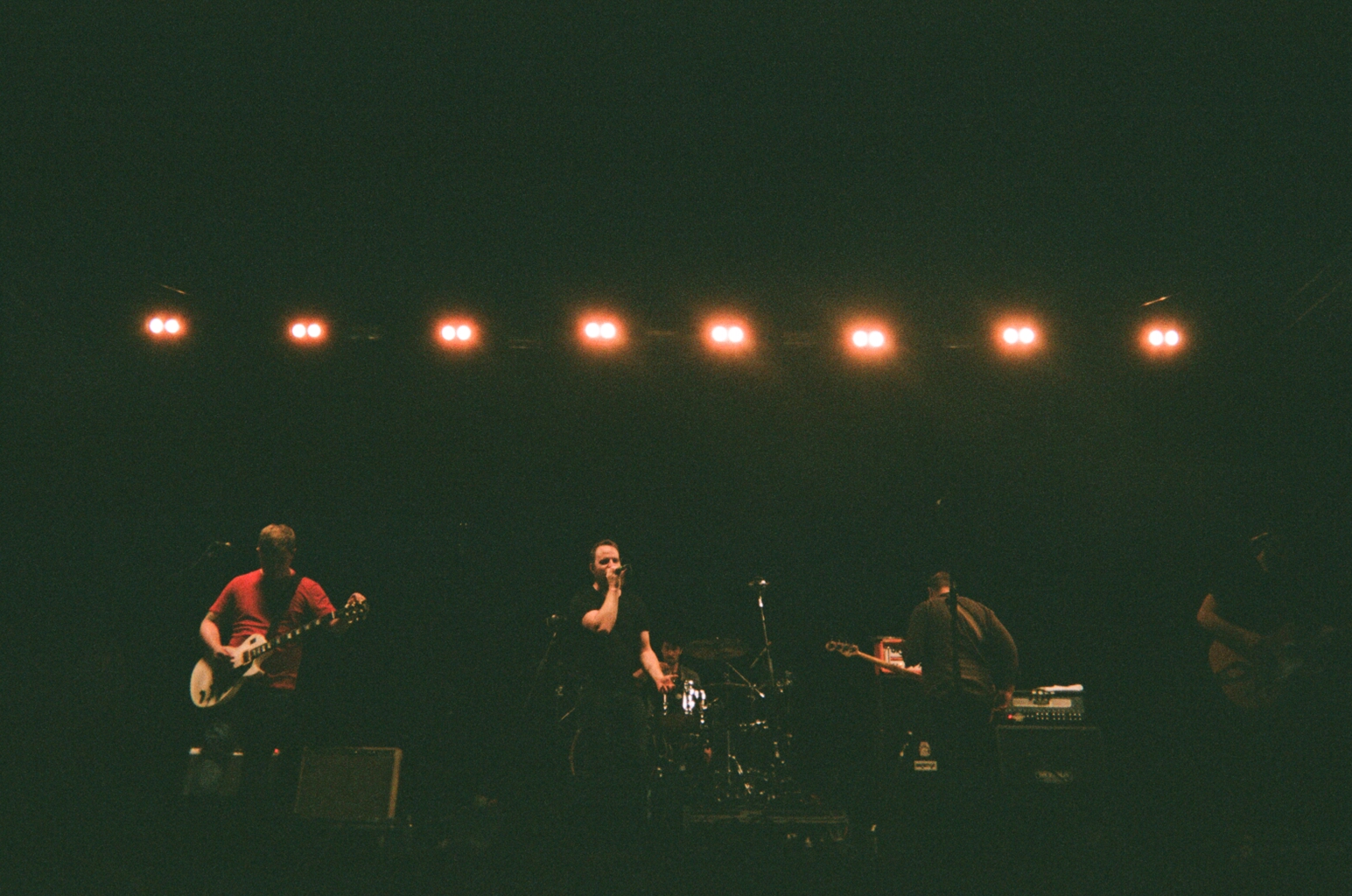 Pennsylvania band The Wonder Years have been around for the most part of 15 years now, having just released their 6th album last year. Playing Download for the first time this year, the underrated pop punk group have undoubtedly exposed themselves to a new kind of audience on the Saturday. They reveal that they landed in the UK that morning, and will be staying in the country for less that 30 hours total, just for Download. Having seen The Wonder Years play in small venues and at festivals alike, the absolute passion in singer Soupy’s stage performance is a sight to behold time and time again. It’s rare to see a band feel their lyrics so deeply and be able to transfer that to the audience in such an effective way. It’s the kind of music you’d wanna be eye to eye with the singer for in a small venue, but seeing The Wonder Years play such a high spot up in the Avalanche stage is much deserved.

Enter Shikari closed the Avalanche Stage on Sunday night, fulling up the tent to the brim despite a clash with Slayer. Having been around since ‘99 and having shifted through genres a bit throughout their career, going from metalcore to post-hardcore, from experimental rock to electronicore, the band proves that they are popular as ever. Fans of different ages and walks of life seem to have gathered in the tent, all dancing, singing and celebrating together. At one point, two boys climb one of the metal structures designed to keep the tent standing. The gig stops, and singer Rou Reynolds calls out “I respect you so much, but you have to come down or they will cancel the show.” The guys climb down to a roaring applause, and the gig continues. Rou’s lyrics are often political, and he complains about climate change denial as the crowd cheers him on. Songs like Arguing With Thermometers and Take My Country Back are sung loud and proud, and the absolute highlight is greatest hit Sorry You’re Not A Winner. Truly a show that no-one in that tent will forget soon.

Even though The Interrupters didn’t release their first record until 2014, they got a flying start touring with Rancid, playing Riot Fest, and later supporting Green Day on their tour. Having become full-on ska punk legends already, they revived and elevated the genre and are since selling out venues worldwide. Aimee Allen, also known as Aimee Interrupter, has a stellar voice, and with the addition of the three Bivona brothers the band has an amazing style. With The Interrupters appearing at multiple festivals this summer, more and more people are turning into full fledged Interrupters fans and it shows. It’s 6pm on a Friday in the Avalanche stage and from the front to the back people are singing along. The setlist has a good balance between their three albums, and they even tease a cover from “a legendary East Bay band.” They start playing Metallica, much to the delight of the audience. Then they abruptly stop “nah, this isn’t the one.” The audience bursts into a mix of laughter and disappointed shouts. They do the same with Green Day and Rancid, until eventually settling on Operation Ivy; the forefathers of the punk genre. The Interrupters close their set with This Is My Family, and for just a moment the Download crowd does feel like one big family. 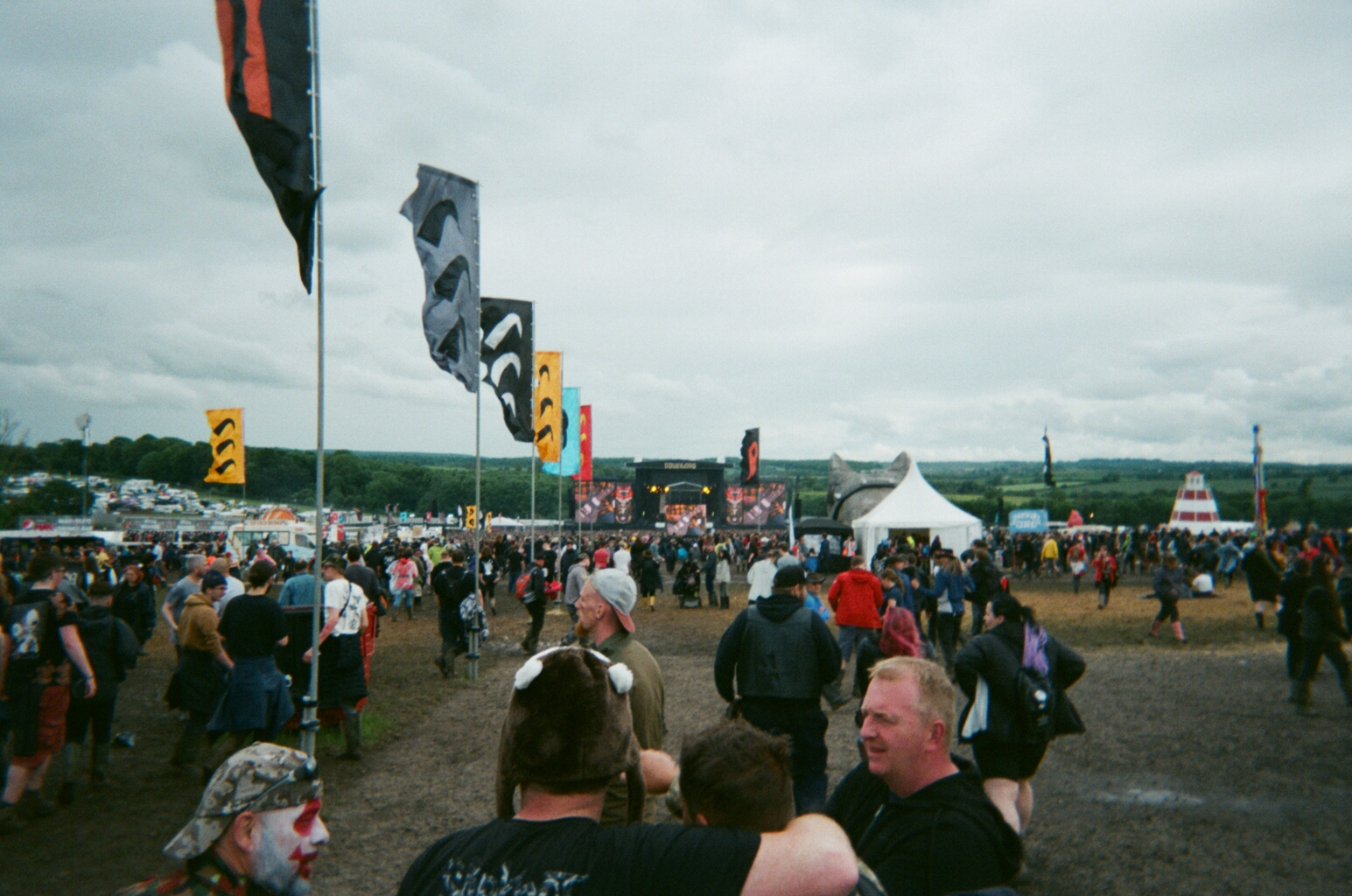