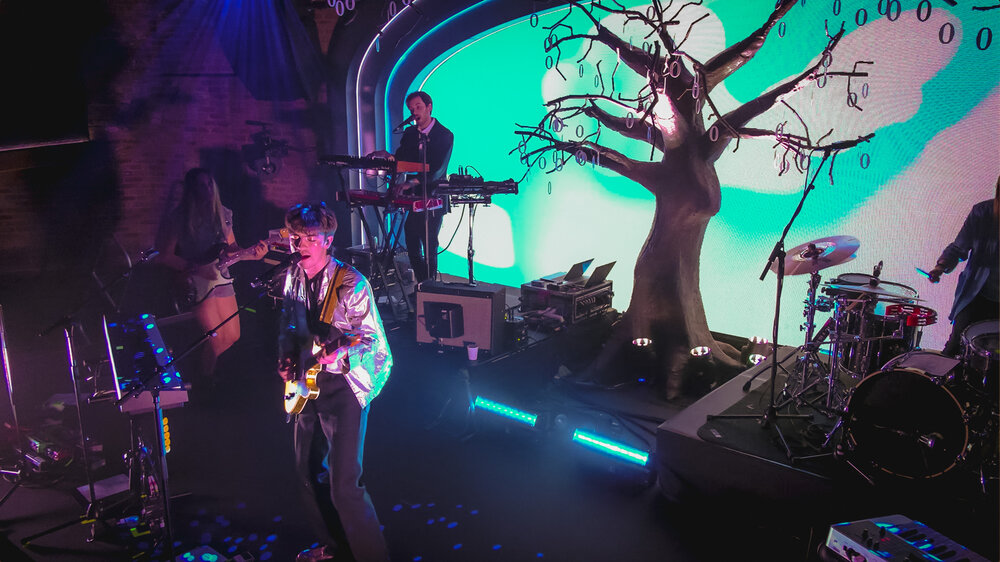 It’s no secret that we’ve missed live music but the 21-year-old was on hand to give us a live virtual experience we’ll never forget. In celebration of his second album Zeros, Declan McKenna took to the stage at London’s Lafayette to perform the album in all its glory whilst showcasing some classics from his debut album, What Do You Think About The Car?. As it’s been a relatively short wait (3 years to be exact) for Declan to release new music, it’s fair to say that fans have most certainly missed the musician. Known for his high energy performances, captivating vocals and glittery makeup, it was only right that Declan McKenna live-streamed the gig so fans could rejoice at the return of a future musical icon.

Opening the show with You Better Believe!!!, the party atmosphere instantly hits as a rolling of the drums come in and a familiar voice can be heard through the microphone, and you instantly forget that you’re sat in your bedroom. As the keyboard draws the song to a close, we transition into single Be An Astronaut, an anthemic song and a spine-tingling performance.

Being sure not to waste any time, Declan and the band jump straight into The Key To Life On Earth, another single from the new album that would’ve been met with cheers from the crowd under usual circumstances. Followed by Beautiful Faces and Daniel, You’re Still A Child, all synth-pop masterpieces that work incredibly well live inciting passion and energy throughout.

With his glittering silver jacket and gold eye shadow literally playing to a home crowd, Declan asked “how you doing?” to which he immediately replies “that’s great to hear”, although I’m sure that was met by screams from the sofas of fans all around. Emily and Twice Your Size were up next, both of which start slower and work up to catchy, anthemic choruses. Rapture graced the stage next with Declan’s signature high vocals and a chorus that will be stuck in your head for days.

Sagittarius A* slows things down with a warm and inviting vocal that offers up pure joy. Eventually, Darling closes the Zeros section of the show as the artist moves onto classics from his debut and British Bombs, a high energy, politically-charged single released last year. From one political song to another, Brazil was the indie banger that instantly had you singing along and coincidentally it’s the track that gave him new found success. Make Me Your Queen saw Declan bring out an acoustic guitar, creating yet again, a sing along in front of the screen.

Drawing the evening to a close, Declan ended with fan favourite Listen To Your Friends, creating a moment of pure bliss. Even without an audience Declan McKenna celebrated his brilliant new album and provided an energetic show that took fans away from the worries of the outside world and gave us a little piece of what we’ve missed so much.