With SXSW 2021 just around the corner, we’re highlighting 16 artists you won’t want to miss during this year’s online festival. 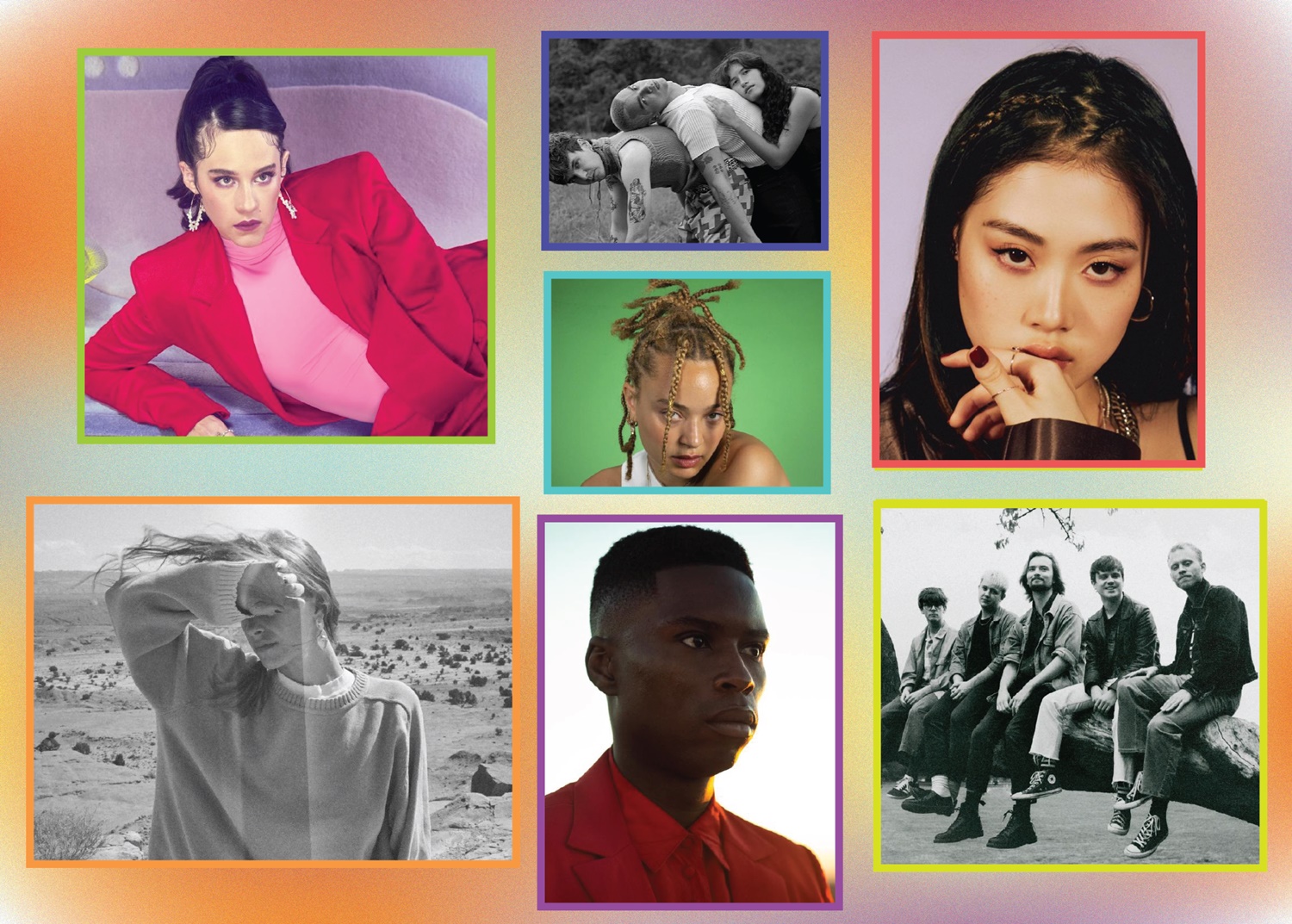 SXSW 2020’s cancellation marked the beginning of an unbelievable year for the global music industry. Now, a year later, SXSW Online brings us a new way of enjoying music. Here are the artists, newcomers and accomplished alike, that are set to take 2021 by storm.

As soon as we heard Anything You Want in SXSW’s Spotify playlist, we could tell that Weird Milk are destined for great things beyond their own little pop-spangled, indie rock world. Their songs evoke feelings of nostalgia and delight. Gorgeous harmonies, expertly-crafted melodies and bouncy love songs, what more could one want? The quartet, based in North London, is made up of Charlie Glover Wright, Zach Campbell, Alex Griffiths and Joe ‘Blue’ Moyle. (Morgan Winston)

An inspiring, English singer-songwriter whose music doesn’t identify with one specific genre. An innovator at heart, Connie Constance fabricated her own record label (Jump The Fence) to bring her hybrid of modern indie pop and soul-focused R&B manifestations to reality. Her 2019 full-length debut album, English Rose, brings forth her storytelling with buzzing indie instrumentals and slick vocals. With support in both the fashion and music community, Connie is just getting started with her reign. (Mariah Christiano)

Powerhouse duo Ninajirachi & Kota Banks only just paired up for their debut collaborative EP True North in November. Secretive!, their first single of 2021, teases a deluxe version of that same EP. In addition to True North, both artists released solo EPs in 2020, Sweet & the Spice from Kota Banks and Blumiere from Ninajirachi. Despite the newness of their collaboration, their work has a craftsmanship that makes it sound like they’ve been creating music together for years. (Morgan Winston)

The dreamy state of Bristol’s Katy J Pearson is nothing but inspiring in a time of dullness. Her high-tremolo vocals crossed with country twang acoustics, influences the next generation with 1970’s breezy love anthems. The release of her debut album, Return, emphasizes her personal style – “Texas Mama” meets vinyl classic rock – while simultaneously bringing songs to the ones who need it the most, the natural romantics. (Mariah Christiano)

NY-based Couch Prints’ atmospheric, synth-pop soundscapes are undeniably gorgeous. Their debut EPTell U, released in October 2020, takes the listener on a complete journey across its six songs. The band’s sound is hard to describe, “The whispered words, the raised hairs, the sinking stomachs – the EP is an attempt to celebrate those feelings that we just can’t quite find the words to describe. Where words fail to, the EP aims to Tell U.” Couch Prints are Jayanna Roberts, Brandon Tong and Jake Truax. (Morgan Winston)

The natural-born talent, Indigo Sparke, brings introspection into her musical work. She elucidates healing and peace with her indie folk, spacious ballads. Co-produced with Big Thief’s Adrianne Lenker and Andrew Sarlo, the debut album Echo brings out her muted allure and soft-spoken finger-picking. Indigo Sparke remains the first to accurately create palpable gentleness through sound production. A must watch during the SXSW Music Festival 2021. (Mariah Christiano)

In 2020 Chloe Cho signed to AOMG, an R&B record label founded in 2013 by Jay Park, under the moniker DeVita and released an amazing debut EP CRÈME. With credits under her belt such as: her song EVITA! being added to Apple Music’s The 100 Best Songs of 2020 playlist, collaborations with Jay Park, GRAY, Woo, Ugly Duck, and more, DeVita’s career is off to a fast start. We cannot wait to see what she has planned for her virtual performance. (Morgan Winston)

The experimental pop duo Virginia Wing, comprised of Alice Merida Richards and Sam Pillay, guides you into an ego journey through flourishing instrumentals and layered washed synths. In private LIFE, Virginia Wing produces pop-structured tracks while revealing psych-pop jazz and spoken word to call out societal injustices. Their relayed message: we must be better, we must change our habits. The perfect motto for 2021. (Mariah Christiano)

There’s something magical about Nadia Reid’s songwriting and musical presence. Reid’s 2015 debut album Listen to the Formation, Look for the Signs was just the beginning, having followed with 2017’s Preservation and more recently 2020’s Out of My Province. All three albums paint a complete picture of Reid’s soul and experiences. Deeply personal, Reid’s songs feel simple yet layered, with many opening slowly and revealing more details upon each listen. (Morgan Winston)

Awich, short for “Asia Wish Child,” is an established Japanese hip-hop artist who uses bold production and lyrical flexes to bring forth her greatest power: being a woman in a male-dominated industry. She demands space with her gritty base synths and indigenous verses in her extensive projects, Partition and KUJAKU. An activist at heart but musical guru at the core. If you’re looking for truth to be shed, her SXSW set is a must watch. (Mariah Christiano)

Upon listening to Matilda Mann for the first time, we were instantly captivated. Her voice has a similar breathy style to Billie Eilish; it is on full display in The Loch Ness Monster and plays so well off of the punchier percussion in Paper Mache World. Both her debut EP If That Makes Sense and follow-up Because I Wanted You to Know were released last year, and having just signed to Arista Records, we are anxious to see what Mann produces in 2021. (Morgan Winston)

The former guitarist/vocalist of the 50s-inspired surf band, The Drums, comes out with his sophomore solo album Park The Van in the fall 2021. The highly acknowledged Johnny Aries expresses his talent through surf rock and punk melodic jams. Currently in NYC, he is working on evolving his solo career and musical style. (Mariah Christiano)

Iceage is a perfect example of why SXSW’s international focus is amazing; you can discover a band from Denmark with a wealth of music ready to consume. With their newly-announced fifth studio album on the horizon, it is no surprise that despite my lack of awareness, Iceage has been on the global radar for some time. Their debut album New Brigade (2011) launched them out of the Denmark scene and into the global music space, where they’ve steadily increased their following over the last 10 years. Upon diving into their discography, this is one group that we’d love to see in-person… but we’ll settle for virtual. (Morgan Winston)

The beautiful face of Afro-Folk, Bongeziwe Mabandla, brings global expansion through his embracive performances and gracious musical capabilities. Between the flirtation of tempos and his sonic falsetto, he exudes harmony and understanding especially in recent album release, iimini. “I want listeners and audiences to experience my music as artistic and interesting but also as something that they can connect with, no matter whether they understand the lyrics or not,” he says. “It’s been amazing seeing how my music is finding a global audience. This has made me think a great deal about lyrics, the meaning of songs and what I want my music to convey.” Bongeziwe Mabandla’s musical growth is a must follow. (Mariah Christiano)

One of the standout talents representing Mexico at this year’s festival is Ximena Sariñana. After getting her start in telenovelas, Sariñana’s debut effort Mediocre (2008) was met with critical acclaim, earning her a nomination for Best Latin Rock or Alternative Album at the 2009 Grammys. Now, over 10 years since her debut, her recent work, like 2020 single Una Vez Más and her fifth album ¿Dónde Bailarán Las Niñas?, shows off her years of experience and gorgeous musicianship. This is an artist that is poised to re-enter the international industry in a big way. (Morgan Winston)

Mama Duke – a Black, queer hip-hop award winning native to Austin, Texas – brings a state of female dominance to a male dominated industry. Taking home both “Artist of the Year” and “Female Artist of the Year” in the same night, Mama Duke catapulted her career through power and solid determination. Her music consists of new school style with the details of old school influence; an iconic duo for hip-hop success. Find her intimately performing at SXSW 2021. (Mariah Christiano)

SXSW Online 2021 will be streamed via web, mobile and the SXSW Online Connected TV app March 16-20. Select content will be viewable in VR via SXSW Online XR.