Pure chillaxing psychedelic pop bliss. This is the only way I can describe the debut album by British psych-rock outfit, Club Kuru. 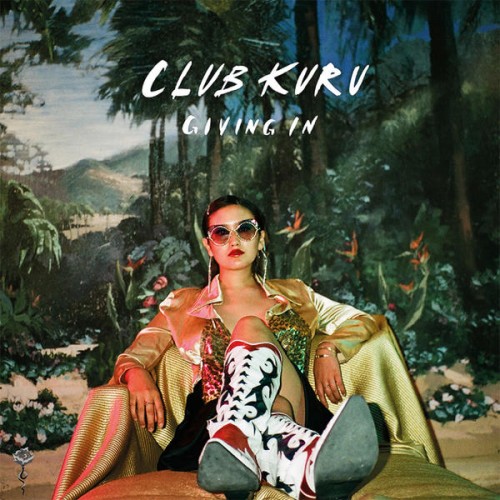 Giving In is an album with a lot of depth to it, after repeated listening you will have a favourite track each time as you discover a new funky bass line or a sweet vocal synth that you didn’t catch first time round. The overall feel of the album is one of peace and escapism but the tracks are different enough from each other, giving a sense that is more familiar with reading chapters in a book. The songs blend beautifully from one into another and it would be forgiven if crowd interaction was at a minimum at a live performance.

Opening track Giving In is full of distinctive guitar hooks with frontman Laurie Erskine’s vocals doing a great job at setting the lo-fi vibes with a great 70’s feel. These vibes are carried through into I’m Still A Man which I can only describe as floating down the tunnel of love on a candy floss pink cloud. It’s so dreamy.

Bass led Not For Me is a stand out track, with great funk vibes that will get those hips swaying. Fergus Ireland is a long standing member of the band and with the bass being utilised to its full potential is a testament to the partnership between Erskine and Ireland.

The band’s latest release of the album, The Memory Junkie is a good foundation for setting the feel of the whole album, with vocals taking centre stage amongst a swirling pool of guitar licks.

You Want It Bad could be the soundtrack to flying through space. Full of alien-esque warbles, sparkly guitar riffs, delicate keys and chimes and airy vocals take you on a mesmerising journey. One of my favourites of the album for sure.

There is a great back story to the making of this record, with enough material to make a gripping movie biopic. It’s a lesson in perseverance and chasing your dreams, no matter what your peers say or what life throws at you. Club Kuru can be proud of their achievement and I am so thankful for them bringing this unique piece of art into the world.