Exploring feelings of homesickness and self-doubt, Chicago quartet Homesafe reflect on their past experiences on their debut album for Pure Noise Records, One. 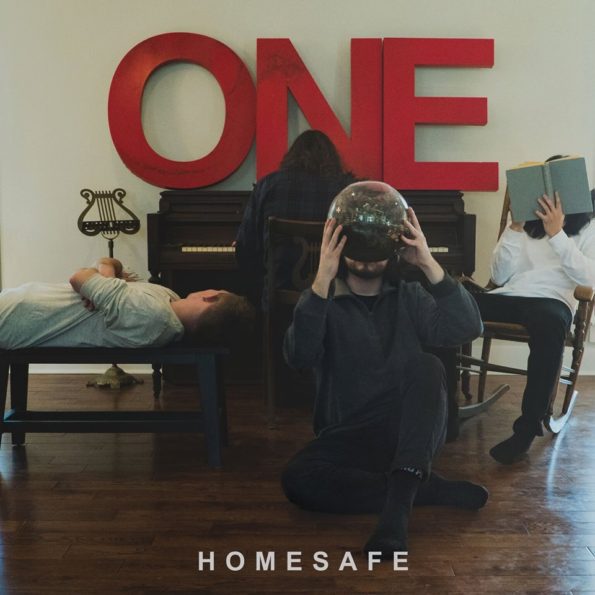 The last four years has seen Homesafe logging many miles and gaining new fans, but with all the funs of touring, there will inevitably be hearty doses of reality in the form of homesickness, self-doubt, and a yearning to make sense of the world around them. Tackling these themes through expressive lyricism and oscillating between the past and the present, One introduces the band’s most cohesive collection of work up to date.

Vocalist and bassist Tyler Albertson said: “This record shows us having seen a lot of the world and starting to form a lot of views about it”, and this changed perspective is evident from the outset. Opening track Point Blank presents feelings of being lost, with an emotionally-laden chorus as the words “I’m tired / I’m tired / I can’t see anything” are repeated with the heavy weight of exhaustion. Driving guitars and drums add to this turbulent feeling of frustration as the battering snare hammers into the listener.

The fiery political salvos Sadistic Society works as a sort of social commentary, with lyrics such as “Tell me how to live / What to believe”. As the powerful vocals soar over crippling drums and frenetic guitars in the chorus, you’ll be struck by the impactful meaning behind the song. Building up to a climatic bridge, you’ll feel empowered as Rumchaks screams “Fuck racism / Fuck oppression / Fuck hate” and it’s truly a call-to-arms moment when you are told to “So take that and press on”, especially with the following guitar solo, creating a rousing feeling.

Breezy Vanilla-Scented Laser Beams is less heavy, and is a lively song that will make you rock out with the bass and riffs. Upbeat, infectious and fun, it contrasts with some of the more serious material on the album, letting in rays of light with its catchy riffs.

A positive message is beamed out in Suits And Ties, where we’re told to take responsibilities for our actions and challenge authority as we hear “Fuck the owners / Fuck politicians / You think you are the ones in charge”. Homesafe experiment with a spoken word section for the bridge, building up the tension as the texture thickens and the speaking grows into shouting.

Sprawling ballad Sideways Sleeper is one of the most personal and intimate entries on this album, starting with an exposed and tender guitar line. The slow pace makes it perfect for waving your arms along, and it’s not difficult to imagine an arena of people waving along to this song. Poignant lyricism combine with tinkering high notes to create a heartbreaking texture.

One will leave its mark and bring infectious tunes that will remain with the listener. The balance between the calm and the storm on this album demonstrates the band’s ability to craft music that can resonate with listeners and make a lasting impact. Although there are many topics that are wrestled with, you learn the valuable lesson that the resolve to confront uncertainty is always stronger than doubt itself.