Interview // BEING AS AN OCEAN

With pounding choruses and a gripping narrative, Being As An Ocean’s most recent album PROXY: An A.N.I.M.O. Story has shown the band to be completely in their own league. 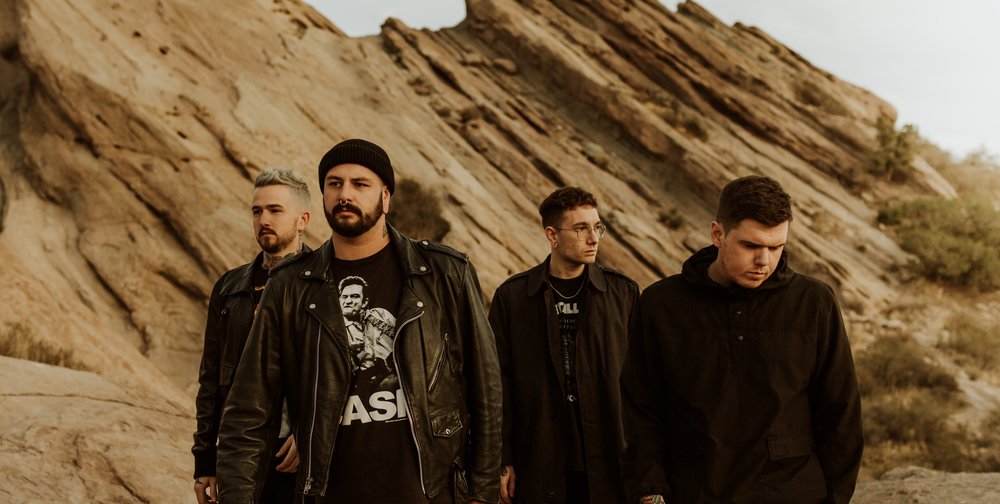 No detail has been lapsed in this body of work; from the thought-provoking themes to cathartic choruses that pack a throbbing punch, it carries all of the characteristics of the band’s emotive post-hardcore history and reworked them into an exciting new chapter, one with even more hot-blooded passion and urgent honesty than ever before. It’s a well-executed body of work, with a clear indication of much thought lying behind the album, and vocalist Joel Quartuccio reveals that the concept of it “came about a year and a half ago when we decided that whatever we were going to do next should be heavily conceptual. I wrote the rough drafts soon after that decision.”

A listen to the album will reveal that the world occupied by PROXY: An A.N.I.M.O. Story is not a wildly optimistic one. Elaborating more on the setting of the album, Joel expounds, “The creative world is set in the not-so-distant future, the 2120’s, a hundred years after World War 3. The world powers had given birth to an A.I. that was meant to restore the planet and humanity, usher in an age of rebirth after nuclear war had ravaged them. That A.I., known as A.N.I.M.O., takes its directives too far, and after a culling of the human race, declares itself a god. PROXY is the story’s sonic companion.”

We have a big vision for the future, and the possibilities surrounding music and film interest us greatly

We got our first glimpse of this dystopian universe when the music video for Play Pretend was released. From scenes of self-whipping and burning infernos, it’s as dramatic as can be for a music video, yet the cinematic expressions go far beyond the screen. Intended as a condensation of the overarching plot of the album, Joel expands upon the visual feast presented in the video, and says, “My character in the video is the creator of A.N.I.M.O. and designer of the Proxy, autonomous robotic extensions of the great A.I.’s mind. A.N.I.M.O. had previously held the Creator in a suspended sleep chamber until his reawakening, following a malfunction in his pod. After coming to, he reacquaints himself with the history of the end of man and learns of what befell humanity on account of his creation. He is overcome with despair, regret, and loss. He finds that the outpost he is being held in has a small stock of the Wise Man mushrooms the Company had been developing, and he proceeds to ingest the psychedelic. During his trip, he faces joyful memories and haunting visions of his lost daughter. After his experience subsides, he resolves to take vengeance on his creation.”

If that sounds like it could form the plot line for the next science-fiction blockbuster, then you wouldn’t be surprised to learn that the genre has distinctly influenced the band’s creative vision. “Most of us have always been huge sci-fi fans and are inspired and affected by so many things in so many genres. Ex Machina, The Matrix, Blade Runner, Deus Ex, Star Trek, and AKIRA were all pretty big ones for us and influenced the thematic and aesthetic design” reveals Joel.

Even though the video for Play Pretend is already out of this world (both literally and metaphorically), Joel revealed that the final product is actually unedited version of a bigger idea. And with such grand ideas already in place, one could only imagine the magic that could be created with more resources. Joel ponders, “If we had unlimited funding and could let our imaginations run wild, we would have loved to turn it into a feature-length feature that we score. We tried to offer just that on our scale. We have a big vision for the future, and the possibilities surrounding music and film interest us greatly.”

Although limited time, resources and expenses could form one part of potential frustrations, Joel admits, “I think the hardest part of the whole process lay on Tyler’s shoulders. He weaved the 14 individual songs together to form the cohesive album, something that takes considerable time and extreme amounts of patience and imagination.” Yet one would be hard-pressed to argue against the fact that the album is indeed very cohesive, and this can be partially attributed to the band’s ease and shared visions for their music. Joel adds, “The most natural part of recording this album was agreeing on the vibe. We all knew exactly how we wanted it to feel, the ethos of it.”

For Joel, one of the most important mottos that he lives by is “Be the change you want to see in the world.” This mentality is reflected in the album, in its themes of solidarity, empathy, and the general shared human experience. “I love both of these passages from Play Pretend and Find Our Way because they embody the feelings of strength and compassion that the lyrics in the album communicate:

Play Pretend: ‘Look around and see the glory
Feel the breeze caress your skin
We have to come to terms with ourselves
Real knowledge blooms from within
A strength is found in weakness
Push away the thoughts of disgrace
Let’s all refuse restriction (Find courage)’

Find Our Way: ‘I can’t climb inside your head or shoulder the load you carry
Never cried the tears you’ve shed, but we have all known misery
If you go it alone, you forgot all chance of rescue
I know you feel lost, but I’m here to wander with you’” confesses Joel.

Music is my passion, it is my soul’s language, and it has given me my life’s community

Bearing in mind the negative depiction of A.I in the album and video, it follows that the band are focused on the genuine human connections that we form, and the authentic experience of being a human especially since all of our lives and perceptions differ from each other. For Joel, being human “means living an experience-full and emotionally rich life. It means being vulnerable, energetic, joyful, compassionate, scared, courageous, and continuously growing. Our minds and spirits have nearly infinite potential for growth, and it would be such a waste to never chase that expansion through the embracing of life’s lessons and adventures.”

“I will always be grateful for the human connections we have made through music, whether it was with our fans, making new friends, or sharing in collective spiritual moments while performing live. One of the most important lessons I’ve learned is to always be open to new and challenging situations when they arise in life because it’s usually the difficult times that cultivate personal growth and empathy for others”, Joel reflects.

Getting a strong sense of the firm beliefs that Joel stands by, he concludes by turning to the mechanism that allows him and the band to share such beliefs; music. “Music is my passion, it is my soul’s language, and it has given me my life’s community. Music means damn near everything to me”, Joel concludes. There’s really no better way we could have phrased it ourselves, and the only thing we can add on top of is that you should go and listen to PROXY: An A.N.I.M.O. Story if you haven’t yet already. Trust us on this one.