Coming off the success of their last album in 2017, Dune Rats have returned with their down-to-earth, quirky, nostalgia-inducing third record, Hurry Up And Wait. 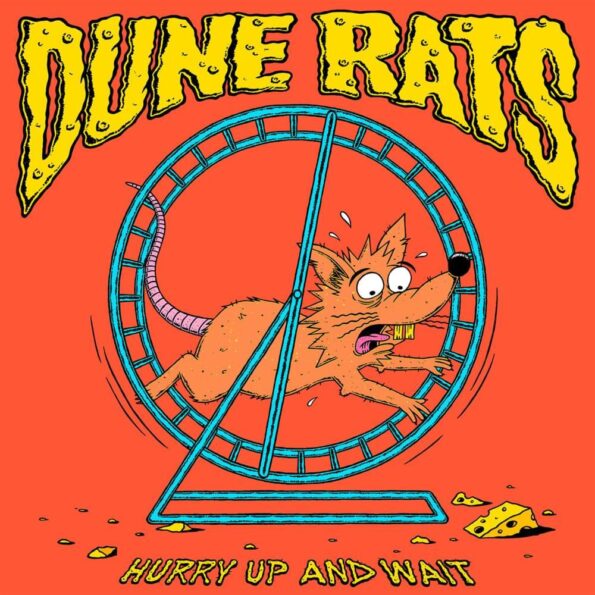 There’s good news and bad news. The good news is that “the Dunies” do not disappoint. The twelve-track compilation is fast-paced, lighthearted, skate punk that really brings on the urge to play Tony Hawk’s Underground with your mates. Their personality shines through on every track. The bad news is that the run-time is under 30 minutes. Even though it feels complete, you’re still left wanting more.

The tongue-in-cheek vibe of the band is put into the spotlight from the very first track. On (Intro), we are introduced to their friend Bobby D by way of cheeky, drunk voicemail calling the band “mad motherfuckers.” The second track, Bobby D, is named for this character and where we see the upbeat sound for Hurry Up And Wait showcased.

Rubber Arm, a song about being indecisive that is all too relatable, is a great sing-a-long track. It’s worth noting that while No Plans is a fun, bouncy, almost satirical piece of work directed at the relatives that quip “do you guys play covers, or just originals?” or “oi, my cousin knows how to play the guitar – he can play Jack Johnson!” that the chorus could blend with that of Rubber Arm. Intentional or not, it makes you do a doubletake.

Coming in with a bold bassline, Crazy is described by the band as one of the heavier songs material-wise. It is also the heaviest song on the record sound-wise. It’s a punchy track making it the perfect lead single.

There is a surprising appearance from K.flay on Stupid Is As Stupid Does. The fast pace and high energy of this track will make it a fan favourite to dance to during live shows.

Possibly the most playful song on the album comes with the late-nineties sounding punk tune If My Bong Could Talk. If you couldn’t tell from the previous nine songs, it’s here you can hear that they are three chill, goofy dudes that aren’t taking life too seriously. It’s hard to not feel endearment towards them.

To close off the album with Mountains Come And Go But Aussie Pub Rock Lives On Forever kind of says it all. Aussie pub rock (or whatever genre you consider Dune Rats) is forever. Long live the Dunies.

They have our attention and this is one release we should all be psyched about.