Captivating, inviting and addictive, Creeper’s new album Sex, Death & The Infinite Void  paints each song as a new chapter of a twisted and ‘deadly’ love story. 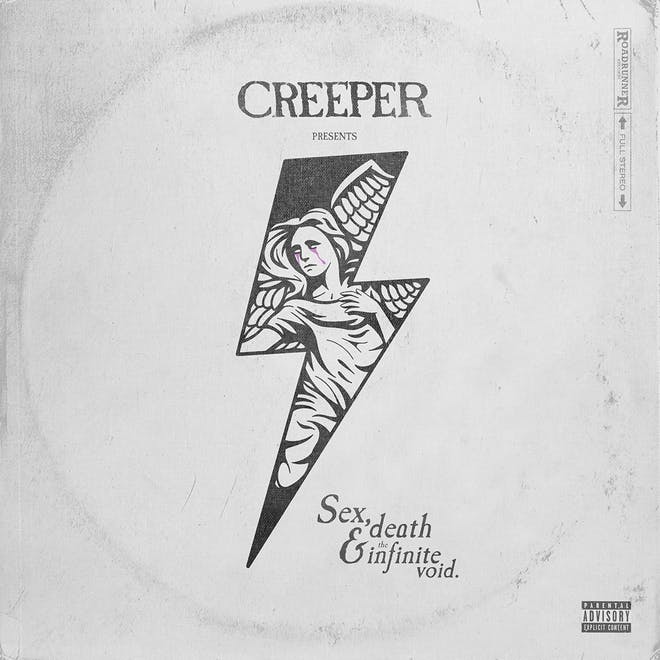 Grab a glass of wine, dim the lights, make yourself comfortable and prepare to be immersed into a captivating world infused with the romantic and classy Hollywood vibes from the glamorous era when Elvis was walking the earth. Backed by a dramatic and grandiose punk rock soundtrack, the new Creeper ‘universe’ is captivating, inviting and addictive, keeping you hooked until the very end as each song reveals a new chapter of a twisted and ‘deadly’ love story.

Hallelujah! slowly sets the mood for the journey to come. Be My End starts painting the picture of a thrilling relationship, packed with adventure and danger, however Born Cold turns this connection into a trivial endeavour to pass time, while questioning the lack of feelings. Cyanide follows and further taints the idea of love, portraying it in antithesis with its generally positive character and instead as a gradually deadly experience. Surrendering to this unconventional type of relationship, Annabelle celebrates this unholy love as another way of enjoying life itself.

With a light mood and dreamy instrumental, Poisoned Heart turns its creepy lyrics detailing a deadly obsession into a hopelessly romantic, almost innocent desire for eternal unity that transcends the boundaries of the limited human life. Thorns Of Love shifts the focus to Annabelle, the one who stole lead character Roe’s heart, and her satiric, darkened soul residing behind an alluring façade, as she ridicules society’s depiction of an idealized love.

Four Years Ago changes the perspective as the leading vocals switch and the mood lightens up as the piano accompanied by the violin become the prime instruments. If before, he was the one telling the story, now it’s her (Hannah Greenwood) turn to take control of the story and portray their love as it looks through her eyes, reminiscing the day it all began and contemplating how their feelings have changed over time. Napalm Girls returns to Will Gould as the lead vocals and together with him, the rock sound takes over again, with the lively guitars and dynamic drums back in the spotlight. This continues until the end of the album, with Black Moon marking the decisive moment that leads him to surrender himself to the will of this infectious and thrilling love and with the last song, All My Friends, talking about something that I’ll leave for you to discover.

Overall, this is not an album: it is a modernized approach to an old-school manner of storytelling. Very carefully thought through and skillfully laid out, the twisted love story unravels gradually and seamlessly flows from song to song. Sex, Death & The Infinite Void is surely a spellbinding album with an intriguing concept, which will surely leave its mark on anyone who gives it a go, but especially on those of you dreaming of an unconventional yet old-fashioned love story.