With PUP describing the EP being compiled of songs “too unhinged” for Morbid Stuff, it’s clear we are in for a treat. 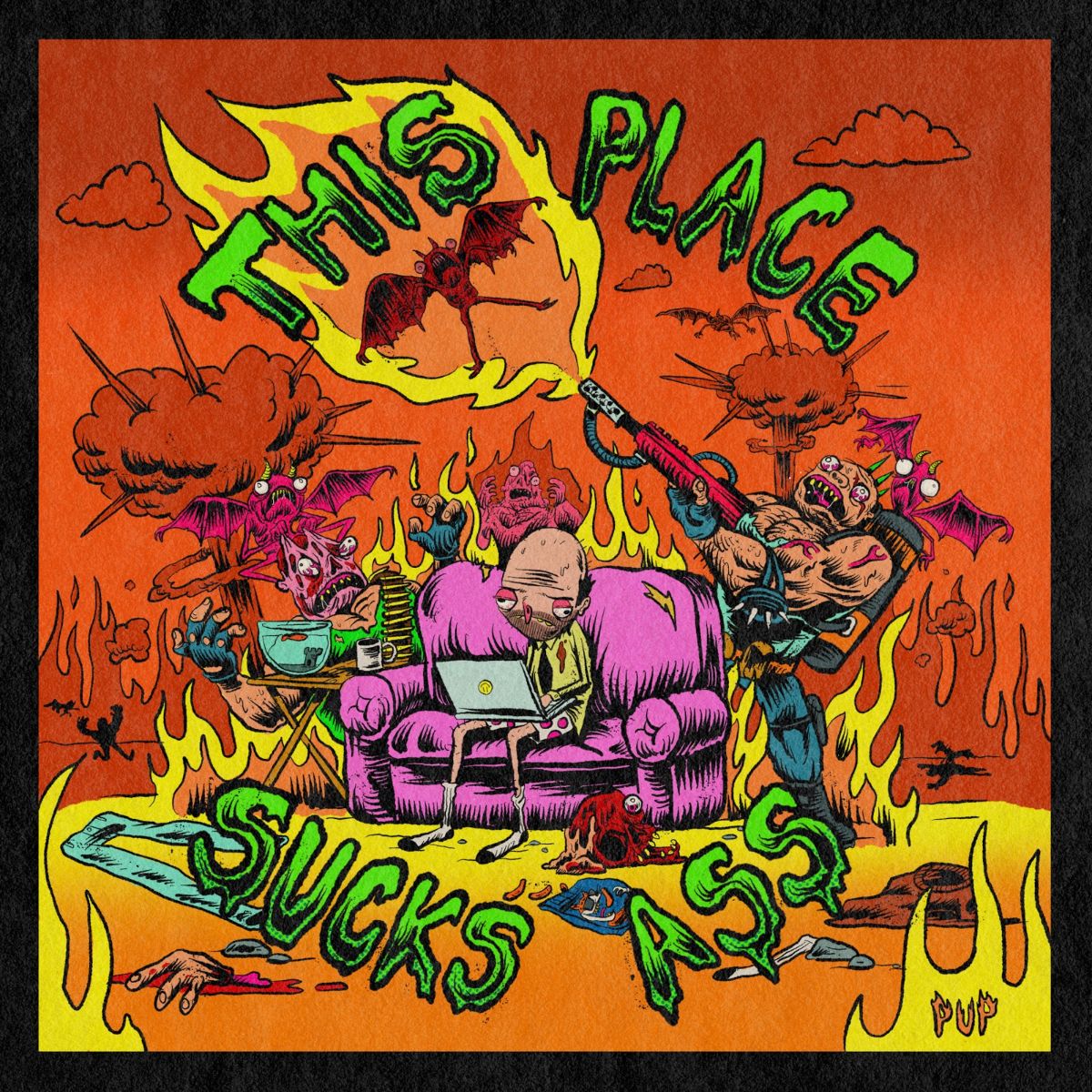 With Morbid Stuff being arguably one of the better punk rock albums of 2019, PUP went into 2020 with quite a reputation to uphold. One they easily manage to live up to on their new chaotic EP This Place Sucks Ass, released through Little Dipper/Rise Records.

The EP kicks off with single Rot, critically acclaimed during its release in September. Rot could’ve come off their 2014 self-titled debut album and you wouldn’t have noticed that something was off; the song sounds dirtily similar to Reservoir in the best way possible. The lyrics for Rot describe dealing with your demons, with negative thoughts crawling its way into your brain and self-sabotage around every corner. This seems to be a theme of the EP, which features PUP’s trademark self-deprecating humour injected into sentiments of crippling neuroses.

One song full of such humour is second track Anaphylaxis. As the title suggests, the track explores the feeling of a life-threatening allergic reaction (“My face is aflame / It was starting to swell / It was starting to bloat / And I started freaking out”) actually witnessed by singer Stefan Babcock on a family member of his. Said family member’s wife kept making fun of her husband and his swollen head, which in retrospect Babcock thought was pretty hilarious. The track’s instrumentals sound surprisingly upbeat for the subject, another nod to PUP’s self-deprecation.

Next on the EP is a cover of Grandaddy’s AM 180, made famous by post-apocalyptic horror film phenomenon 28 Days Later. Whereas Grandaddy’s version is a soft spoken indie rock track, PUP have slightly sped up the song, giving it their own twist. Despite adding a heavier edge to the track, PUP mostly stay true to the original lead guitar and sound of the vocals, making it a big departure from their usual sound.

Subject-wise, Nothing Changes makes a detour back to Rot and the previously described “sentiments of crippling neuroses” on the EP. The lyrics touch upon the theme of trying to fill a void but failing, not being able to drown out the feeling of being stuck in life. Around two and a half minutes into the track it sounds like it’s ending and fading out, when Babcock’s voice suddenly comes in, blasting new hope into an otherwise depressing track. “And even if the wait is long / And all the words are wrong / Put the recorder on and I’ll begin again”, he chimes in, proving that even when you feel like you’re stuck in life, you can always give it another shot.

Whereas Nothing Changes ends on a hopeful note, Floodgates puts the listener right back into an anxious stream of consciousness. The track is a big 180 from the “begin again” message in the previous song, singing that the thought of dying makes him laugh, unable to explain that feeling to anyone else, not even himself. Floodgates is PUP at its darkest, chaotic guitars combined with grim lyrics and going beyond playful self-disparagement. Suddenly it becomes clear why this might’ve been too unhinged for Morbid Stuff, which says a lot given the name of the album.

Floodgates flows straight into last track Edmonton, a cathartic 70-second ripper that unravels violently from its opening chord to its final riff. With Babcock’s shouts barely audible over the shredding guitars, the song closes the EP with a great force. It’s tragic that a banger like this, along with the rest of the This Place Sucks Ass, likely won’t be moshed to in a little while to come, but when we finally do it will undoubtedly be glorious.