Album Review // ASKING ALEXANDRIA ‘Like A House On Fire’

With one eternally feisty attitude, but everchanging ways of expressing it, Asking Alexandria once again rise from the ashes with an intoxicatingly fresh sound and uninhibited avant-garde lyricism in their thought-provoking new album, Like A House On Fire. 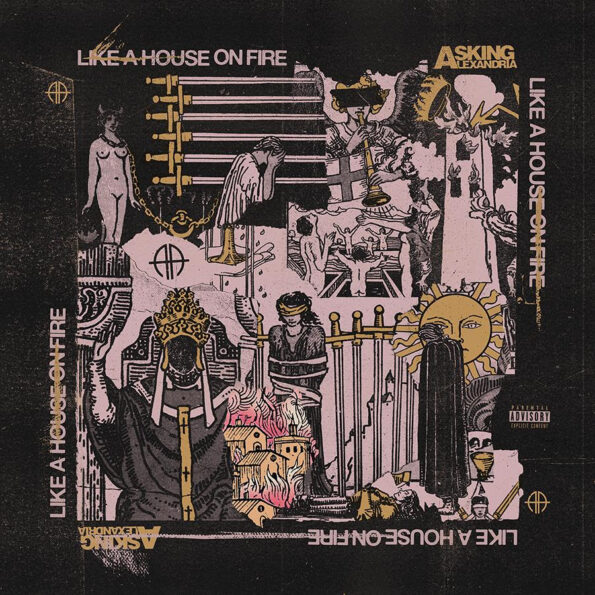 Asking Alexandria return with a fiery, heavy and above all thought-provoking album, designed to recalibrate your thoughts on society, while you sing along to intoxicating choruses. While their previous, self-titled album has eagerly resurrected the trademark AA sound, following the prodigal son Danny Worsnop’s return, the band has reinvented themselves in Like A House On Fire and reached a bliss point by adopting pop and electronic influences to complement an arguably mature yet undeniably fresh take on rock and heavy metal.

House On Fire gives you exactly 23 second to take a deep breath and mentally prepare for the treat that awaits you: a carefully balanced album where heavy guitar riffs, heavier raspy vocals and galvanizing energy constantly trade places with pace-setting drums, melodic vocals and provoking lyrics. While They Don’t Want What We Want (And They Don’t Care) makes crystal clear the discrepancy between one’s view and the society’s goals, Down To Hell turns up the heat even more by further flaunting their disregard for external opinions with unshakable confidence and a heavily dismissive attitude. Antisocialist mildly tones down the aggressiveness of its predecessor in favour of a more conversational and explanatory approach that wraps up and cements the message.

I Don’t Need You brings a well-deserved change of pace, by shedding the violence completely and opening the floor for a candid, heartfelt and vulnerable duet, after which All Due Respect regains the conviction of righteousness and even pushes it to the next level of condescendingly declaring that “you’ll be stuck in the shadows of the heights of my greatness”. Take Some Time, One Turns To None, and It’s Not Me (It’s You) continue to revel in this idea of superiority, however, they bring a change in the overall energy of the album, with less heavy metal elements and more movie soundtrack worthy and radio friendly rock sound.

Here’s To Starting Over does pretty much what it says on the tin: it redefines the message and attitude of the album, laying down the combative patronizing stance in favour of accepting one’s fate. What’s Gonna Be duels over the uncertainty of future with hope and eagerness while Give You Up and In My Blood attempt to define it by resorting to retrospection and introspection. From a sound perspective, these two songs predict a future heavily soaked with electronic effects, affecting both the instrumental and the vocals – quite exciting, right?

The Violence returns to the initial antagonistic vibe of the album, while Lorazepam revives the radio rock sound for a party befitting grand album finale.

Overall, Like A House On Fire claims its place in the current rock climate’s top albums, with a largely appealing, definitely matured and modernized sound paired with an infectious, arrogant and assertive attitude. Asking Alexandria have taken a gamble by toning down their underground metalcore and heavy metal roots in order to make room for pleasing pop and electronic sounds, however, they succeeded in integrating them into their style. They put forward not only one well-crafted song but an entire album of independently strong songs, which is something that few bands have achieved from the first time they experimented with elements from other genres. Therefore, I believe they can safely claim “You’re gonna fall face down while I inspire greatness”.