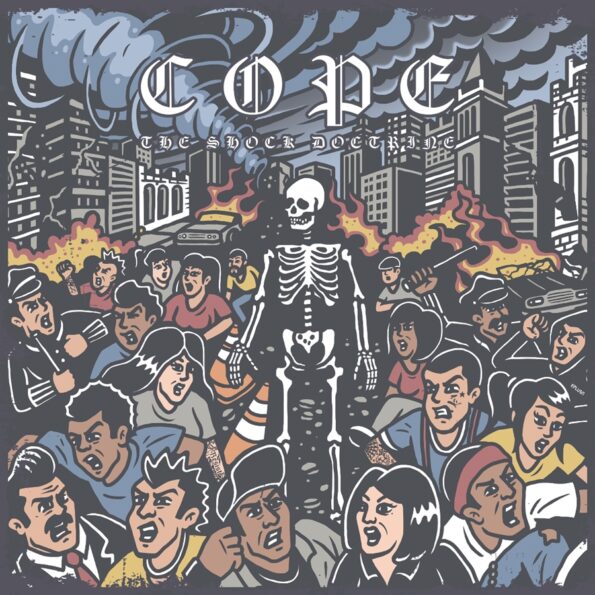 Banger after banger, Cope put together an intoxicating debut album, guaranteed to blow up your speakers and fill you with restlessness. With a combination of metal and hardcore, sprinkled with punk influences, each tune is beyond heavy and on top of its aggressive and combative sound, it also addresses a different modern world, societal ‘disease’ and points out people’s attitude towards it.

Life In 3D will kick you out of slumber and wake you right up with its alert rhythm, violent drums and aggressive vocals by Tom Walker who seems to pour his soul in every word and whose passion about each of the addressed topics can be strongly felt throughout the album. I’m Alright, Jack takes the madness up a notch with even more fast-paced, heavy drums and dissonant guitar riffs, topped by vocals shifting between screamo to ‘melodically’ spoken lyrics during the chorus. Gold follows and is probably the best song on the album as it hits a bliss point between having a noticeable, memorable melody and being heavy and forceful enough to fit the song’s message and the band’s attitude towards it.

Empire raises the question of how it all ended up like this and commend the masses for accepting and hiding their heads in the sand instead of standing up to the obviously endangering decisions taken by the leaders, while the mid-album theatrical monologue Territory Missing is shifting its perspective to mock the outrageously calm and repugnant approach of the people in charge as they knowingly condemn their people to a steady demise.

All in all, The Shock Doctrine is a great debut album for Cope, demonstrating noteworthy lyricism, strikingly proficient vocals and remarkably powerful instrumental which consequently mark them as a highly promising band worth keeping an eye on. While they have undeniably proven they can write and deliver heavy, forceful, rebellious bangers that have a strong message behind them and would certainly rile up the crowds during live shows, their songs generally lack that distinct and catchy musicality that would make the listener remember a song long after it’s finished. From all of them, Gold is the only one to close on achieving this and in the future it would be great to see more of their songs having a melodically memorable backbone.