The quintessence of pop-punk, Tickets To My Downfall marks the latest reincarnation of the Rap Devil, proving that Machine Gun Kelly is the rockstar the world needs right now. 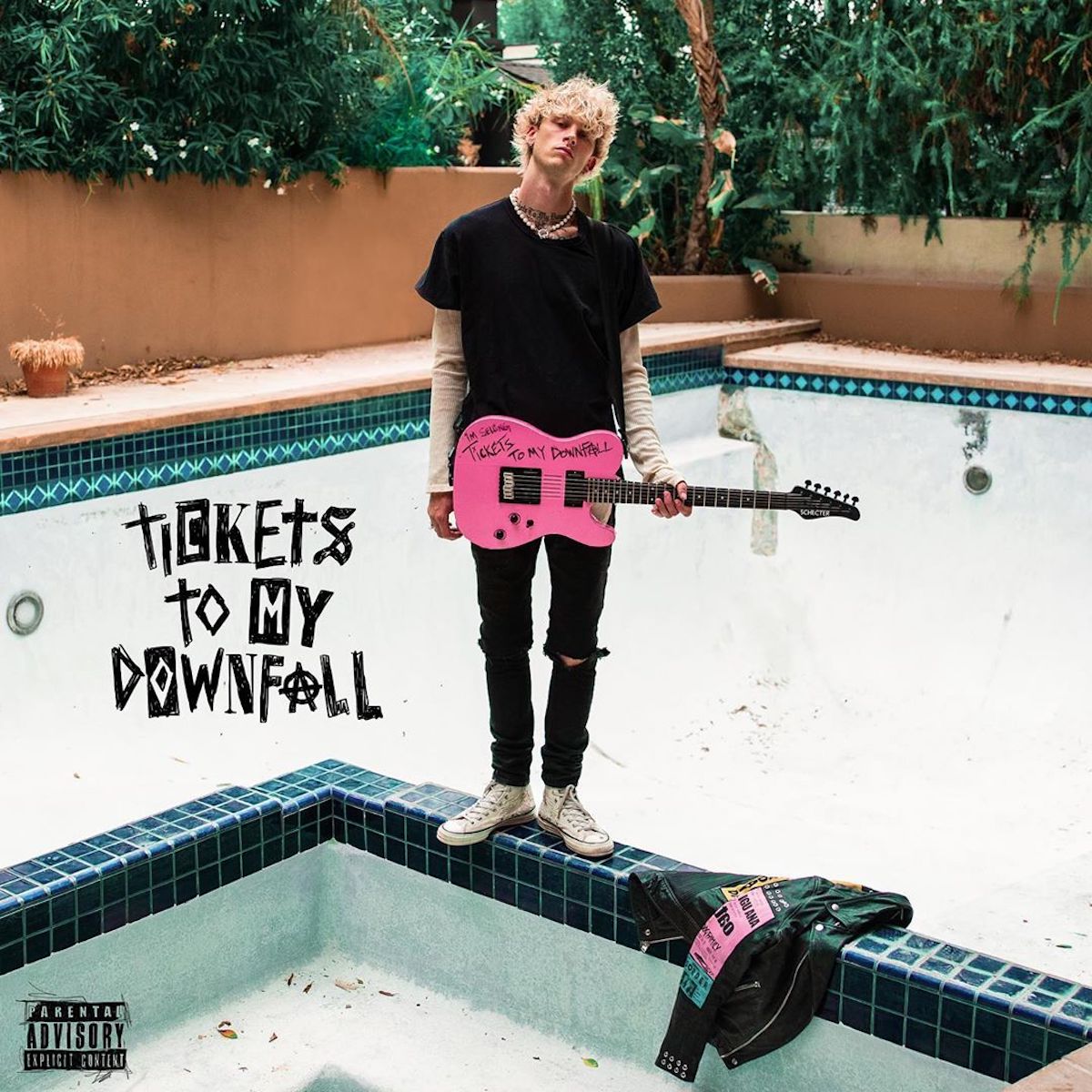 In a year when everything seems to be falling apart, Machine Gun Kelly finds himself on the highest of highs. Topping off his 2019 release, Hotel Diablo, with the Travis Barker-produced fifth studio album, Tickets To My Downfall cements MGK’s musical versatility and ability to float between genres with ease. Having collaborated with many artists in the scene over the years, the rapper certainly is not a newbie to the pop-punk and alt rock world, yet Tickets To My Downfall marks the biggest deviation from his signature sound. Pop-punk through and through, it’s a star-studded, rock-blasting and awe-inspiring compilation of songs that transports you straight back to the golden days of the early noughties pop-punk utopia.

Set to be played front to back, Tickets To My Downfall paints a picture of a twisted love story, opening old wounds and chronicling intimate experiences while heading towards the inevitable catastrophe. “I’m sellin’ tickets to my downfall”, MGK roars on title track that builds from a subtle acoustic opening to an anthemic punk-inspired chorus, emphasising our attraction to somebody else’s personal tragedy.

With electrifying guitar riffs and unabashed honesty, kiss kiss spins into a reckless abandon of youth that continues on the next song, drunk face. “I’m still young wasting my youth / I’ll grow up next summer” might be the most pop-punk cliché there is, yet it’s the one that we can’t get enough of.

Travis Barker’s prominent drum work shines throughout the record, especially on the sweeping and viscerally poetic pop-punk masterpiece, bloody valentine. Featuring Halsey, forget me too is a fast-paced and hooking offering, definitely one of the stand out tracks on the album that elevates both artists to new heights.

Throwing his verse on all I know, Trippie Redd adds a rap-infused flavour to the track, followed by lonely which takes things down a notch. Leaving a piece of his heart and soul in every song he writes, MGK once again dives into his psyche as he embraces his vulnerabilities, using the power of music to heal. A song about the loss of his loved ones, lonely brings out the emotionally raw and autobiographical elements in Machine Gun Kelly’s songwriting.

Oozing with swaggering attitude and charisma, WWIII is a one-minute long punchy in-your-face personal anthem that hits hard with lyrics like “Who the fuck are you / To tell me what to do? / ‘Cause I am not your bitch.”

In his signature humorous style, Pete Davidson graces us with his presence on kevin and barracuda (interlude) which acts as a prelude to concert for aliens. With lyrics “The headlines say ‘The world is over’”, concert for aliens already sounds like the anthem of 2020. Packed with thought-provoking metaphors and references to modern music culture and common behaviours that are embedded in the nature of showbiz, the song is sure to set hearts racing and feet pounding with its mammoth riffs and propulsive drums, effortlessly blending together and bursting into a pop-punk glory.

Featuring blackbear on rap duties, my ex’s best friend is yet another infectious slice of pop-punk that showcases a melodic pop side to MGK’s vocal range. Clocking in at just under two minutes, jawbreaker further hints at MGK’s slick word play, whilst nothing inside (feat. iann dior) reveals the inner darkness we all struggle with, as we hear “I’m running low on serotonin in these empty moments.”

banyan tree (interlude) creates a pure and intimate moment as it captures a personal conversation between MGK and his current partner, whilst tearjerker play this when i’m gone marks the finale of the record. Written by MGK for his daughter, the closing track is an acoustic tender piece of music that reminds us of the fragility of life.

Embracing his inner emo punk, Machine Gun Kelly once again defies the expectations and triumphs as he revitalises the pop-punk spirit on his new album. Filled with arena-worthy choruses and introspective lyricism, Tickets To My Downfall is a snapshot of MGK’s songcraft mastery, artistry, and creativity. With unmatched determination and untamed, irrepressible passion, Machine Gun Kelly has successfully become a genre-free musician, and with his EST movement going from strength to strength, there’s only one reference that seems fitting right now, and it is to his 2017 song Golden God and the lyrics: “20/20 vision, see the future / Looks like the crown do fit.”