Band Of The Week // BLONDES 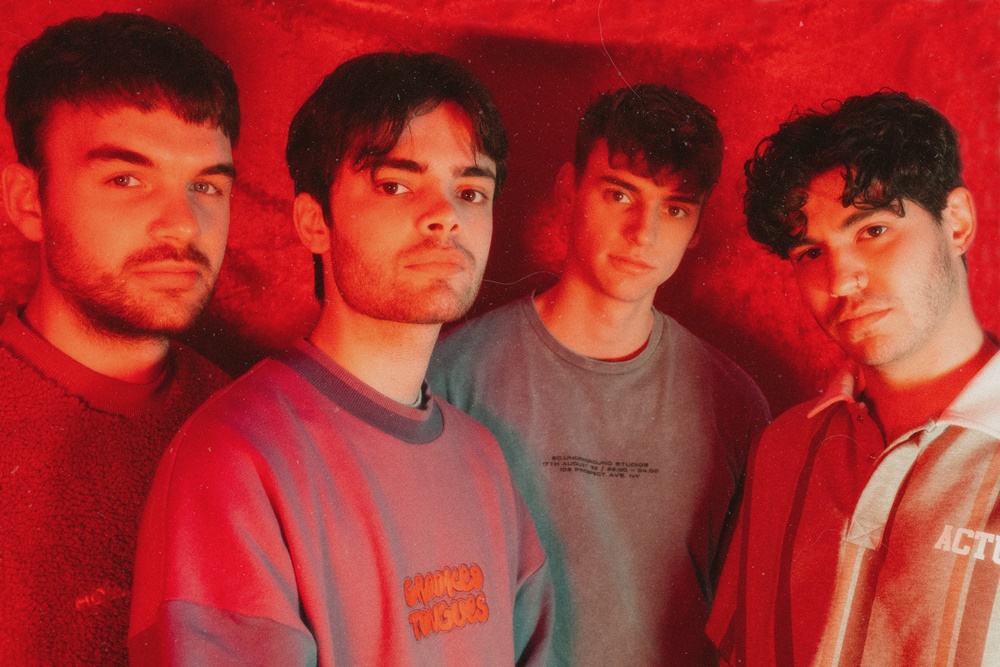 Hailing from Nottingham, Blondes are the newest band you should have on your radar and with the release of their newest video Minimum Wage, now is the perfect time to do so. Minimum Wage sees a yearning melody that will latch onto you through fuzzy guitars and reverberating vocals, creating a reflective indie tone for you to dote upon.

The video for the track finds the band drawing inspiration from ‘Stop Making Sense’, the 1980s concert film by Talking Heads, and follows the narrative of the band becoming workmen building the set of their own promotional film from a small cardboard box.

Speaking about the video, guitarist and songwriter Alex Davison shares:

The video for ‘Minimum Wage’ was great fun to shoot. It was filmed in Liverpool in a large industrial space where we, the band, pull out the elements for the pop-up video from a small, delivery sized, cardboard box. We are the workmen that construct the set for the film in which we then star. The idea came together very quickly, and references ‘Stop Making Sense’, Wes Anderson, and Mary Poppins. There’s also a nod in there to Andy Warhol’s ‘Factory’.

Feeling intrigued by the video and what the band still has in store, we spoke to Alex to find out more about this up-and-coming band.

A book I read recently featured a protagonist whose life philosophy was ‘things are what they are, and whatever will be will be’. I think that all you can really do in life is accept that you have no idea what’s going to happen, and through that you can really appreciate each moment as it comes. If you spend all your time worrying about infinite hypothetical futures then you never really appreciate your life for what it is right now. Because whether you think it’s good or bad, that’s all your life ever is: whatever is unfolding in front of you in this exact moment. So, appreciate it, it’s all you have.

A nice warm pastel yellow. The colour yellow is so joyful and bright, and that’s what our sound is about. Euphoric, sun-is-shining indie pop.

If you could set Minimum Wage to any existing narrative, what would it be the soundtrack for?

It would have to be something visually striking and dynamic, something like Edgar Wright’s Scott Pilgrim vs The World. Minimum Wage has the right kind of energy to compliment a film so colourful and so over the top.

What was your fondest memory of filming the video?

During some of the takes, Tom and I stood on stage next to each other, insulting each other and doing hip-hop style adlibs to the song under our breath trying to make each other laugh. Doing performances of the song whilst trying not to crack up at each other was really funny. Thankfully I don’t think we ruined too many of the takes.

Are there any behind-the-scenes stories of shooting that you can share with us?

We were really struggling to get hold of smart shirts and trousers in our sizes in the lead-up to shooting, so our manager actually gave us three pairs of his own trousers that were all exactly the same. He’d bought three pairs of the same smart trousers from the same shop in the same sizes just because he loved them so much. And he ended up having to give them away to us because everything else was sold out online. All for the end result though, eh?

What are you most looking forward to with your upcoming debut EP?

Some of the material that will be on the EP, we’ve been sitting on it for months. We’ve had to be really patient now that we’re not complete amateurs releasing DIY tracks out of our bedrooms, and now that we’re lucky enough to have a label behind us. So, it’s going to be amazing to finally get to share that with everyone. Hopefully everyone will be just as excited about it as we are.

What’s been the most unexpected part of your musical process so far?

Working with producers is something I had expected to find challenging because we’ve always been used to creating music completely independently. But in reality, it’s been really good fun having outside perspectives involved during recording. It’s a fantastic learning process that stops you from being overly protective of what you’re writing. The more you let other people help you, the less your ego gets in the way of making something great.

I think music is such a wonderful thing that we are capable of. It’s pure expression. It’s like dancing:  just a pure act of joy, not trying to achieve anything or reach any sort of destination. When you make music, when you sing, when you dance, you do it for its own sake. You enjoy it because it’s an opportunity to forget everything else and just express yourself.