Band Of The Week // SWIM SCHOOL

Bringing an immersive sonic palette of textures, swim school make waves with their debut EP making sense of it all. 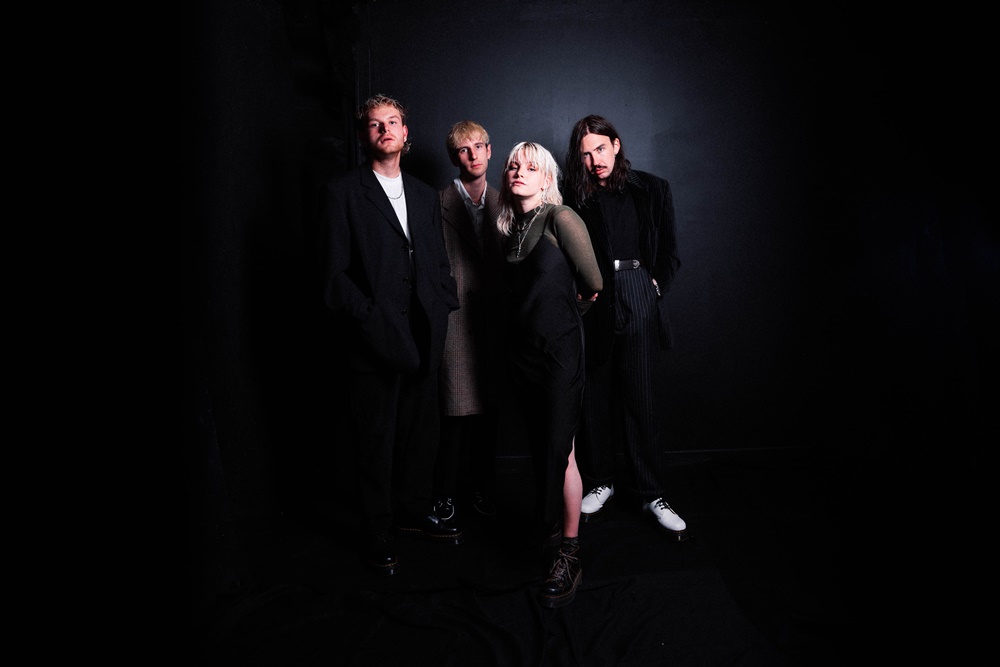 Edinburgh indie outfit swim school burst through with youthful exuberance and a yearning eagerness in their new EP, making sense of it all. The group has been building up their acclaim, having scored places on various Spotify playlists and featuring on the line-up of various festivals over this summer, including Latitude and All Points East. making sense of it all sets out to solidify the band’s place and name, acting as a body of work that provides the world with an overview of what the band is about. Speaking more about the EP, frontwoman Alice Johnson shares:

Each track on the EP is based on an event that I’ve experienced in the last year and the effect it had on my own mental state and also the mental state of everyone who was involved.

The title ‘making sense of it all’ is the perfect way to express the common feeling that runs throughout the EP. There’s sad, happy and angry songs, each expressing how it feels to try and understand how you are feeling in hard situations.

The EP got all the freshness, novelty, and burgeoning excitement that one would expect from a debut, as the band navigates their way through finding their own songwriting voice and sonic identity. Drawing inspiration from indie heavyweights such as Wolf Alice and Foals, the influence can certainly be picked up but it’s still distinguishable with a heavier feature on rumbling electronics and the personal lyricism that has roots in the experience of Alice. You’re immediately immersed within the depths with opening track let me inside your head, as you’re surrounded by throes of blistering guitars and acerbic bass lines. It’s dramatic and laden with suspense as the fuzzy vocals remain partially shadowed until a searing chorus breaks through and lets a sonic dam loose.

Meanwhile, anyway channels a summery brightness with its happy-go-lucky melody that hides the pain of the lyrics, brushing aside worries in a faux-happy manner that we’ve all done at some point in our lives. A serenity hangs over everything you wanted, as dreamy synths are carefully draped atop whimsical vocals before building to a more electronic-heavy and rhythmic second half that seems slightly at odds with the initial gentleness, but you won’t be dwelling too long upon its foreignness as see red picks up the pace again for a stomping track that will be sure to go down as a riot in the live circuit.

It’s a stimulating debut that will leave you intrigued to find out more about the band and what they have in store. To sate our curiosity, we spoke with drummer Billy McMahon about the makings of the EP, and their fondest memories of curating it.

I feel we all would have a different answer for this one, however, it’s so easy to get caught up in everything that happens behind the scenes, before a show and after a show and it can become a little overwhelming. So, with that, we always remind ourselves to ‘have fun’, as simple and easy as it is, we are in music because we absolutely love music and you’ve got to make sure you are loving everything you’re doing and having fun together as a band whilst doing so!

A cross between light pink and dark green, not too dark and not too light. With our EP in particular, there’s dark aspects, there’s more uplifting aspects and then there’s parts in between that bring the two extremes together. Light pink is also our EP font colour and dark green has been used for photo shoots to show the transition between the older swim school and the new swim school. We also just love the colours to be fair.

If you could set making sense of it all to a TV show or movie, what would it be the soundtrack for?

Generally speaking, we have been told it reminds people of late 90s grunge, like an American teen movie set in the 90s, especially with outside. So anything with Leonardo DiCaprio or Johnny Depp, with long hair and baggy clothes seems pretty fitting.

What was the most unexpected aspect, whether pleasant or unpleasant, of recording and producing your debut EP?

I think it goes without saying that starting an EP process in a global pandemic is pretty strange. There were times that we were getting full speed momentum, then times we couldn’t write or practice together so we had to switch to sessions on Zoom in our own homes, sending ideas back and forward and then trying to demo individually. Summer last year enabled us some time to get the first few tracks done as restrictions were eased, and then when we were allowed back into our rehearsal space we just demo’d as much as we could to get a collection of potential tracks together and then narrowed it down. I think what we’ve taken from it is when we face massive setbacks, how to adapt and still be productive. It’s a common theme speaking to musicians at the moment that everyone has self taught themselves production skills they perhaps never had the time to do before and it will definitely help our songwriting and creativity in the future.

What was the biggest lesson you took away from making sense of it all, whether from a musical perspective or emotional perspective?

Each song on the EP is personal to us all in some way. Alice has mentioned previously that when times have been tough, she has turned to music for support and if our EP can offer someone hope or a safe space to gather their thoughts then that means the world to us. Musically, it’s the most daring music we’ve ever made. So different from our older songs, we took a chance on making music that we felt confident in at that moment and time rather than playing it safe and although it was so nerve racking releasing the first single let me inside your head because it was so different, it was also so rewarding to see our fans take to it so well and that momentum has just continued to grow with each release.

If you could re-make your debut EP, what’s one thing you would change?

Honestly, we wouldn’t change a thing. making sense of it all is just the perfect name for the EP in the sense that this year has been so challenging for everyone and when times have been tough, we’ve turned to each other as well as music as an escapism and although this process may have been different without the pandemic and lockdowns, the way it was completed made us appreciate the music so much more and the process that goes into writing a song when there’s no finalised date set in stone.

Are there any particularly fond memories or behind-the-scenes stories that you can share with us?

I think the standout would be recording the first track outside. This was the first song recorded with our new lineup and was also the first time we were properly allowed to get together safely with the restriction rules. The song itself was such a change in direction for us and once we took the brakes off, the creativity started flowing and that was when the new swim school sound was created. It was such a special moment, Alice filmed the session on her camcorder and we hope to get that released soon as part of something special.

Music means absolutely everything to us. Not only is it the only thing we’re good at, it’s also a way for us to express how we feel and we’ve also met our best friends through music. When we’re not rehearsing or playing shows, we’re out in Edinburgh watching local bands and having pints in favourite local venues like Sneaky Petes and Mash House.

Music has also given us some amazing life experiences that we always dreamed of doing and fingers crossed, we can keep doing this for as long as we can.