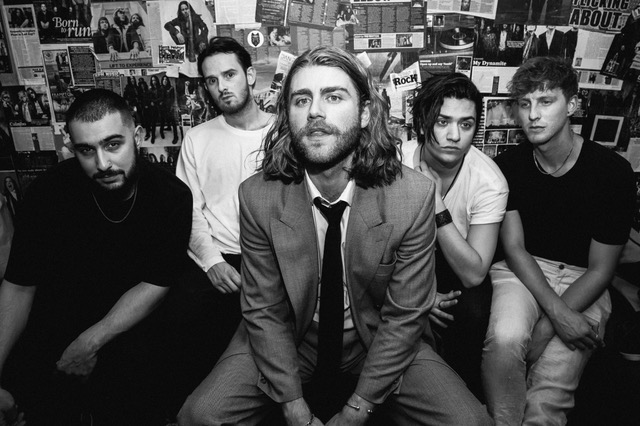 Consisting of frontman/vocalist Conor Rabone, guitarists Tom Wingate and Andre Ilkiw, bassist Bruce Higgs and drummer Peter Crampsey, Gathering Of Strangers are a guitar-rock ensemble which formed in Manchester in 2015, whilst they studied at University. Originally from different corners of the UK but united by their shared musical vision, the quintet are renowned for their captivating live performances. Gathering Of Strangers have not only performed electrifying sets at well-known festivals Dot2Dot and Neighbourhood, but they have also sold-out headline shows and supported Electric Six, Morcheeba and Third Eye Blind on their tours. Particularly with the release of their debut single Nice Hair, the magnificent Lady and their striking track Antidote, Gathering Of Strangers have landed themselves air-play on Kerrang Radio, BBC Radio 6 and XS Manchester.

Their captivating newest single Cherry Red is an indie-rock anthem about a couple’s toxic love-game, which compels you to listen with its 80s-esque synthesisers and thumping bassline. Composed in early 2020 and recorded in September 2020, the hypnotic track was produced by David Watts and mastered by Dick Beetham at 360 Mastering. Echoing the passion of the very relationships they are lyrically dissecting, this track stuns with its gritty guitar riffs and Conor’s forceful vocals.

Frontman Conor speaks on the single:

‘Cherry Red’ is a tale of your love/hate relationship with fear. His charm gets you in the bedroom but her power chains you to the bed. It’s then up to you whether that’s something you want to escape from or not.

Along with a new EP which is being planned for the upcoming months, Gathering Of Strangers are set to embark on a run of unmissable UK shows this winter.