If you ever skipped out on listening to Stand Atlantic, there is no better time than now with the release of their sophomore album, Pink Elephant, which ushers in an updated, experimental, and all-around elevated sound from the Australian rockers. 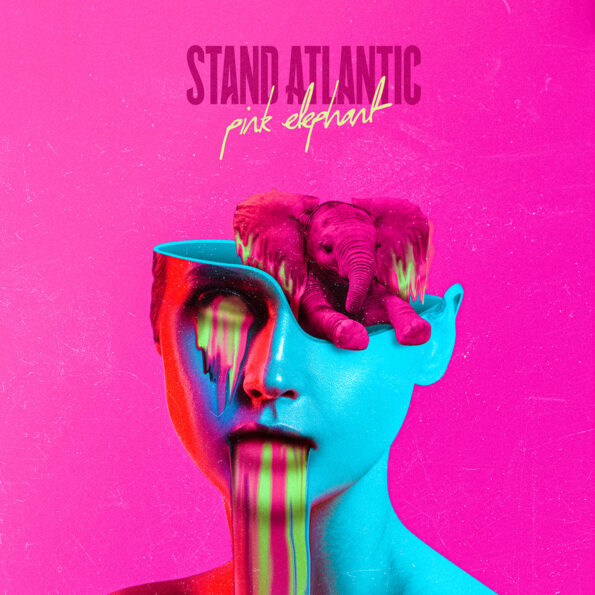 It should be illegal to open an album with a track as hyped up and immediately catchy as Like That. Stand Atlantic set the tone for the rest of the album with this opener. The sing-a-long hooks, riotous arrangements, and uncountable head-banging minutes found throughout Pink Elephant all start from the first “it’s just like that.” From there, the tracks evolve further, touching on the heavier side and leaving the vocals from Bonnie Fraser in their truest, untouched form. Shh! is the first time we hear Fraser’s pseudo-screams and the rawness that aligns with the blunt emotions felt across the record.

One of the more pop-infused songs, Eviligo has a character unlike any other on the album. Reminiscent of the early noughties, the verses are bouncy and light, drenched in bubblegum pink. The sonic playfulness evolves into a full-blown rock song as the chorus blazes in and Fraser’s vocals perfectly strain, capturing the madness that can come along with new crushes.

This human addiction is tracked throughout Pink Elephant. Songs like Blurry, with its short staccatos and fuzzy synths, and the experimental, full-bodied Wavelength touch on toxic relationships. A desire to get out is clear in anguish-filled lyrics like, “So you like to hurt me / Could you cut me dirty?” and “I’m just killing all my feelings, I’m done.”

Although Pink Elephant is largely energy-driven, the inclusion of two emotionally powered, slower songs helps make the album complete. In true ballad form, Drink To Drown stuns with the simplicity of Fraser’s impassioned vocals and sombre, rich piano. Pulling on the common thread of tumultuous relationships seen across the album, the desperation in the repeated line “saturate me if you love me” resonates sadly. Where Drink To Drown stripped everything away, the other downtempo track, Silk & Satin, fully embraces the electronic side of the album. The trap beat fits surprisingly well with the other tracks, but it stands in a world of its own.

On a final, defining note, Stand Atlantic close out their sophomore record with the song that kicked it all off: Hate Me (Sometimes). The finale boasts qualities found in the previous ten tracks – spirited guitars, dazzling synths, an acoustic spotlight, and most importantly, another bouncy, earworm hook.

The bottom line is there’s not a single song on this record worth skipping. If you’re questioning if you should listen or not, do yourself a favour and spin it at least once. Pink Elephant brings together all the best elements of pop-punk and sprinkles it with everything from synths to acoustics to raw vocals. With Pink Elephant, Stand Atlantic prove the age of sophomore slumps is over.