Band Of The Week // FLIPTURN

Celebrating the one-year anniversary of their most recent EP, Something You Needed, flipturn share a fanciful video for the beloved track Glistening. 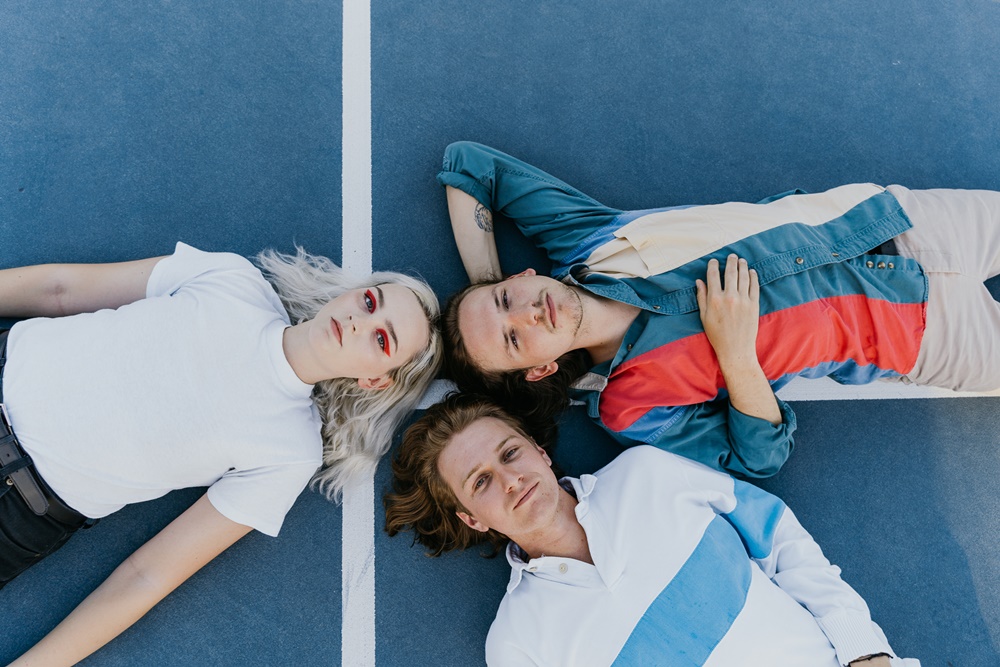 Florida-based trio flipturn have captivated our hearts over the course of the past year with their EP Something You Needed, with their woozy melodies and dreamy tones that make you feel like you’re swimming in a sweet sea of sound. To mark the one-year anniversary of the work, they present the metaphor-filled and thought-provoking music video for Glistening, one of the much-cherished tracks on the EP.

In a daze of mellow guitars and intimate lyricism, it’s a track that you will pull close to your heart as you share in the feelings being sung about. And even more so now, with the visual representation creating another aspect to attach yourself to. Toeing the line between the real and the make-believe, it explores how overly focusing on material needs can affect relationships and ultimately lead to feelings of loneliness and regret. Speaking more about the inspiration behind the video, the band explains:

The video takes place in three worlds – a colorful vibrant birthday in a dark decrepit home, bright happy cartoons set against an empty, lonely world, and mirrors that reflect the opposite of each of our environments.

Delving more into this fantastical world and reflecting upon what the EP has brought for the band, we spoke to the trio which consists of lead vocalist and guitarist Dillon Basse, lead guitarist Tristan Duncan, and bassist Madeline Jarman.

Tristan: I wish I lived by a motto, as I am rather fickle when it comes to experiencing life. I often catch myself re-evaluating my perception, which I think is just a product of the trial-by-fire we call life. It is nice when I try to not take life too seriously, though.

Tristan: I actually mildly have synesthesia (albeit self-diagnosed, so who’s to say), but I actually experience “color” and a sense of “pattern or shape” in music. It’s sometimes a cool writing tool, but it’s mostly felt when I just listen to music. It’s like a visual representation of the way a sound has a shape and feeling. In regards to your question, there’s no one color to attribute to our sound. Maybe some blue-ish purple.

If you could set/adapt Glistening to a full length movie or TV show, what would it be the soundtrack for?

Madeline: Even though it wouldn’t fit perfectly, it would have been interesting to hear Glistening in Bojack Horseman. The song alludes to wanting to be a better person (or in Bojack’s case, a better horse) and doing what you can to get there. It would be kind of funny because a line in the song is “I could be an elephant” and in Hollywoo (the city in Bojack Horseman), pretty much half the population is animals. Ideally, Glistening would find its best fit if it was written into a film or show – that way the song would carry more significant meaning and purpose.

What are your most hard-to-break material desires?

Dillon: When it comes to breaking material desires it’s not really the materials themselves that are hard to break from, but the comforts they can give you. A lot of material things can make you comfortable where you are in life, and I believe that constantly trying to keep yourself ‘uncomfortable’ can be the trick.

Which of your three worlds do you feel like our current reality most closely reflects?

Tristan: While they are three separate worlds, I don’t think they are exclusive. We all experience the thoughts that were highlighted throughout the three worlds, and within their contexts, I think they say a lot about what it means to want to improve in life. Everyone ends up at least acknowledging a rut – confronting our issues, whether it be loneliness, loss, or whatever it may be, that can be the most difficult part.

Dillon: A world where people are more accepting and understanding of each other as a whole. That would be pretty cool.

Were there any particular stories that inspired either the track or the video?

Dillon: When we were writing this song we were staying at a cabin up in the Appalachian Mountains. The cabin had this back deck that faced a crevice in the mountains and the sun sat almost perfectly between them, so every morning I would wake up and try to catch the sunrise. When the sun would start coming over the mountains it reflected off the dew on the grass and leaves and created this really cool glistening effect. So I became obsessed with the word and the idea of things “glistening” for a while. The song came together naturally around the word.

In celebrating your one-year anniversary of your EP, what has been the most surprising thing to have come out of it?

Madeline: The most surprising thing to have come out of Something You Needed was learning about the various interpretations our fans made of the songs. The amazing thing about music is that even though a song may be interpreted in different ways, it still has the ability to bring people together. Our song Poppies on the EP is sonically different from any other song that we’ve previously released, so I’m surprised by how well it was received by our listeners! It’s such an eerie song, and I’m happy that they appreciate it as much as we do.

In hindsight, is there anything you would have done differently with regards to the EP and the process of making it?

Tristan: The only thing that I would have done differently would have been live tracking more of the core of the record. While tracking separately comes with its benefits (such as isolation and choices of takes to comp), it also comes at an unexpected detriment. As a band, listening to each other in real-time is important because it influences the way the song is going to be performed at that moment. It’s important to all be on the same page, and in the same room when writing and recording to capture the same energy and understanding of the track.

Moving forward on new music, there will definitely be more of a blend of live tracking and tracking separately. The older we have gotten, the more we have learned how integral the recording process is in tandem with the writing process.

Madeline: To me, music is a way to connect with others. Growing up, my dad and I always would exchange new songs that we found during the week. I owe it to my family for my taste in music, and I love how it has shaped me into who I am today. I know how important music is to each of us, and I think it brings us together as people, and even closer as bandmates. It’s super cheesy, but it’s true!