“This is the best sounding album we’ve ever had.” Offering an exploration of life in all of its highs and lows, we spoke to Lucas Woodland from Holding Absence about the band’s journey towards the completion of The Greatest Mistake Of My Life, his inspirations for crafting his proudest work so far, and the lessons that he has learnt from his own lived experiences. 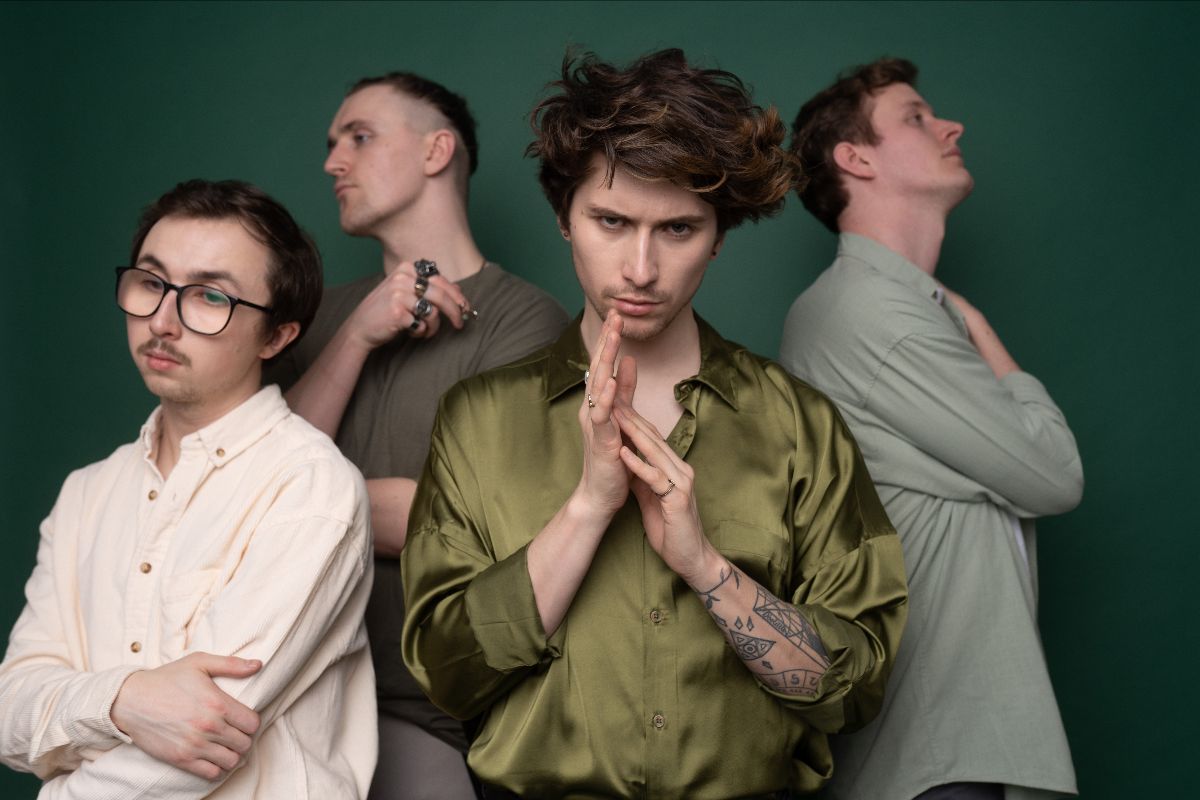 Holding Absence has never been one to shy away from tackling hard-hitting topics in their multi-faceted sound. Questioning our most fundamental experiences, they create music that conveys what cannot be spoken and leaves an unforgettable impact on listeners. In their sophomore album, The Greatest Mistake Of My Life, they delve into even broader existential questions, musing upon seeming futilities and culminating the life lessons they have learned so far. It’s a marked shift from the band’s debut album, both sonically and visually, as it takes on an even wider breadth within its stride.

Vocalist Lucas Woodland confidently asserts that there was a deliberate effort to leave the previous history of the band behind with this new record. He reminisces, “There was a lot of change; we had lineup changes, and the sound was different as well.” Lucas shares, “I think it’s important to be able to tell when a song came out. I view pretty much every song before Gravity and Birdcage as a big deluge of songs, whereas now I feel like The Greatest Mistake Of My Life feels like a new chapter for the band.”

This new chapter was not born overnight though; in fact, the title was first spoken about when the band were touring their debut album, roughly two years ago. By having conversations about the album at such an early point, it provided a direction and Lucas elaborates, “Because we worked backwards with the title, I feel like I had a lot more understanding of what the record was going to become. It’s funny, because writing an album is such an ambiguous thing. You could come up with everything on the last minute, or you could plan everything out, and then it doesn’t go to plan.”

It feels like every song is looking at sadness, but trying to encourage positivity

“As a musician, you’ll always have a vision, but let it guide you a little bit. If the songs do what you don’t want them to do, sometimes it’s for the best, because the music knows as much as you do. Your idea is cool, but if the music is guiding you in a direction, feel free to follow it. I think that’s why I love this album so much, as it sounds as much like what I wanted it to as it doesn’t. It surprises me as I feel like I know all about this record”, Lucas states. “I learn things about it every time I listen to it. That has been as cathartic as writing it was, and the recording process was brilliant. It was six weeks of constant fun and exploration on a creative level.”

“I’ve learned a lot about the album since writing it; I feel like the album is a lot more hopeful than I’d originally intended. It feels like every song is kind of looking at sadness, but trying to encourage positivity”, summarises Lucas.

One of the most noticeable changes includes the band’s transition from a monochromatic aesthetic, into embracing a full spectrum of colour. Lucas shares, “When we started the band and we started doing everything in black and white, we would use reference images of bands like The Cure or Joy Division, or Siouxsie and the Banshees.” He muses, “I think for us, a black and white thing was so easy for people to understand, whereas with this one, we wanted a bit more of a timeless, kind of cinematic vibe.”

“For this record, we kind of did the same; we referenced the same bands, but in a completely different way. It was more like the clothes that they wore in that New Romantic era. I’d say the first album was very much inspired by post-punk and the introduction of indie art rock, whereas this album was more like New Romantic. So weirdly enough, we’ve taken inspiration from the same bands as they were transitioning back in the 80s”, discloses Lucas.

While the band may have taken inspiration from other bands for their visuals, it is not the only source of inspiration that they have stumbled upon. The band has drawn from a myriad of sources to cull together their craft, from the video game character Mipha from ‘The Legend of Zelda’ inspiring Afterlife, to penning poems of inspiration from Reddit threads about what the greatest mistakes of people’s lives were. Lucas briefly expounds upon this, recounting that “[t]here were hundreds of comments, and I found three that I thought were unique and I wrote poems about them. It was really cool on an artistic level to be able to write poetry, and not have to chop things up and force them to rhyme for a change.”

However, the main source of inspiration still comes from those closest to the band members. Lucas professes that “[t]he two most important things in my life is my music and my family, so my family influenced me like no other even from the fact that my parents worship music as much as I do. I always have this funny joke that my first ever show was when I was minus three months old, because my mom was pregnant, watching The Prodigy with me. It’s always been a part of my life. I think the most important thing you can do is to try and learn from those around you, especially if you’re doing something like music because it’s so easy to get lost in the game. Sometimes, I’ll zoom out and I’ll play my mum something, and my mum or my dad will say something and I’ll think, ‘Oh, yeah, that is a good point’ and nobody in the music universe would have said that to me because we’re all so entrenched in this game.”

Lucas’ family also influences his work by directly playing a part in the band’s music particularly in this new album. Lucas excitedly tells us, “My sister is on one of the songs. My sister sings on Die Alone and that is a really special thing for me, as I grew up singing with my sister, and now she’s on one of my songs forever. That’s really magical.”

Continuing to point out his driving forces, Lucas gushes, “A person who influences me a lot in my life is my girlfriend as well. She’ll find little expressions on the internet or something, and show me them and they’ll inspire me into turning them into lyrics. The person who writes these lyrics, and the person who sings them, are very different people so I try and take a lot of inspiration from my loved ones when I’m working on the songs, because I think it adds such a unique flavour”.

Some days, I will wake up and the dark cloud will be above my head, and now I’ll greet it as an old friend

For the band, as important as it is to keep material fresh, there are still bridges they will build to their past discography. Admitting that “I will always reference previous work and draw parallels”, Lucas provides an example in the lyrics, ‘I still see you in monochrome’, lifted from Monochrome off their debut album which has then been twisted into ‘I dream of you in colours that don’t exist’ in Curse Me With Your Kiss from their new album. He shares, “So we’ve gone from seeing somebody in the most dull, dulcet, boring kind of tones to now seeing this person in colours that transcend the colour wheel.”

The lyrical cross-referencing are not the only nods that the band makes, as finale Mourning Song matches the equally shattering Wilt on their last album to round off both works on an extended note. Lucas reflects, “I look at Penance, Wilt and Mourning Song as these progressive, epic, emotional sisters in our catalogue. They have this thread and, we knew that after Wilt, we wanted to end the album similarly this time as well. Wilt was brilliant and I feel like it was such a good way to end the record but Mourning Song is kind of similar in a different way though – whereas Wilt is about the loss of love, I feel like Mourning Song is about the loss of life, which is even more emotional.” Lucas reveals that these longer tracks provide him with more creative freedom, and expresses his preference for writing them “because I know I can say more, I know I can explore more emotion.”

It’s this exact exploration of emotions which gives the record so much of its strength, as Lucas revisits some of his own darker days and works through the difficult emotions to provide a sense of closure and optimism. One such lesson that he has gradually learned is “Coming to grips with things, because shit things happen to good people. I’m lucky I’ve not had a hard life by any means, but the way I felt over the years, I felt hard done by because of the way that my brain works. I think if someone’s gonna punch you in the stomach, just tense as hard as you can. Let it happen, rather than causing too much of a struggle. That’s something that I’ve learned to come to grips with; some days, I will wake up and the dark cloud will be above my head, and now I’ll greet it as an old friend because I’m so at peace with that side of myself now.”

He continues, “Every time I’ve ever felt hurt, or every time I’ve ever felt let down, I’ve learned from those things. The most important thing in life to do is fail, because that’s the first opportunity you have to learn something. And I’ve failed fuckloads, and I’ve learned a lot from it. Even the debut – as much as I love it and I’m incredibly proud of it – it didn’t do what I’d hoped that it would, and I learned from it. I think that’s a big part of why this album is so good.”

The most important thing in life to do is fail, because that’s the first opportunity you have to learn something

Taking these lessons into his stride, there are two key messages that Lucas is now keen to espouse; firstly, to accept yourself, and secondly, to do what makes you happy. He contemplates, “I think those are the two most important things I’d say to any young person. You are the way you are, and learn to live with it. And by all means, try and make yourself a better person and I feel like I did, but there’s some things about yourself that you can’t run away from and you need to embrace them. But also don’t grudge yourself of happiness because that’s such a damning thing to do.”

He adds on, “I want people to come to grips with who they are. I think that’s the main thing for me; I wish, as a young man, that I had somebody telling me to embrace my emotions. And if one person benefits from that, then job done.”

And it certainly feels like the band have managed to succeed in achieving that goal; The Greatest Mistake Of My Life is certain to offer a comfort and closure to listeners, and acknowledge the pain that we have gone through so we can have an even greater appreciation for the good.