“I work really hard to be positive and to plow through the carnage of daily life,” we sat down with Sinead O’Brien to discuss her multifarious passions from fashion designer to punk-focused poet/musician in a world where dreaming big is frowned upon, Sinead makes it her purpose. 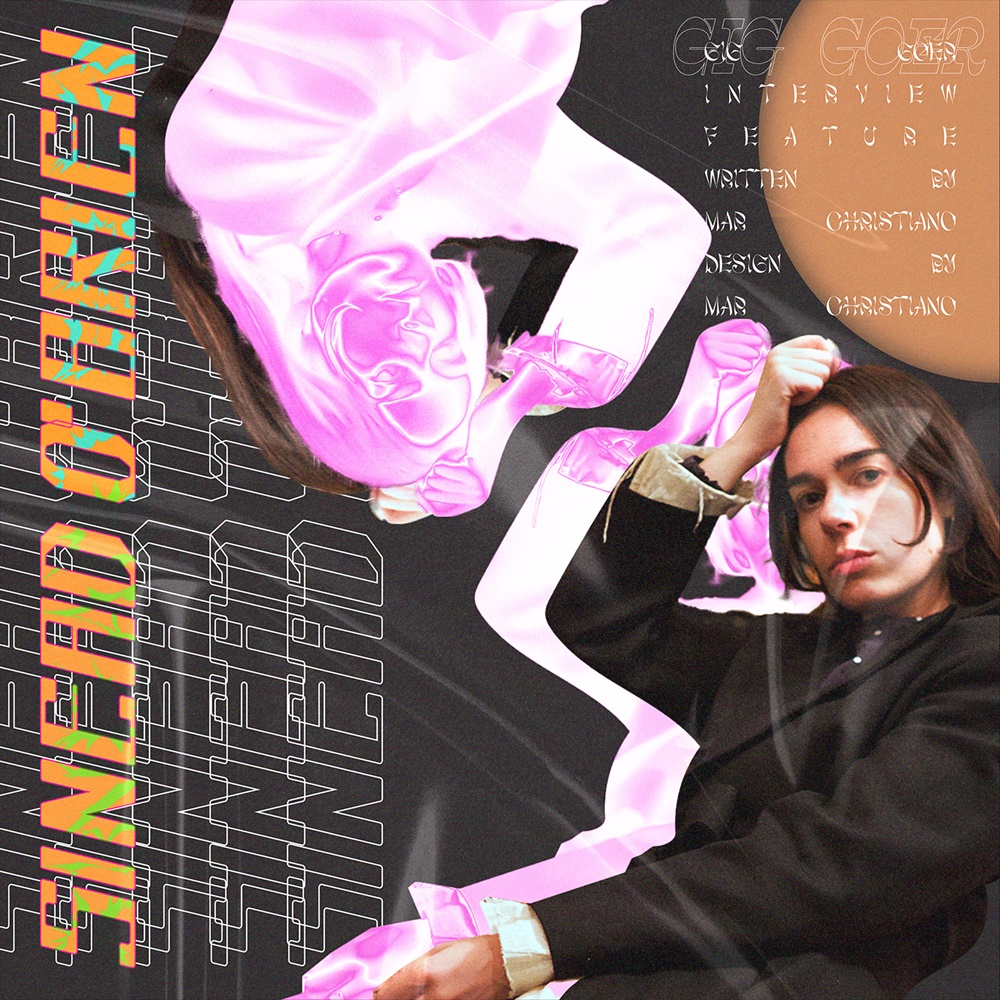 Sinead O’Brien, the ambiguous post-punk poet, shares her acute observations about life’s phenomenons through complex narratives and crucial awareness of the unknown. GIG GOER sits down with Sinead O’Brien to descend into the philosophies within her wondrous mind.

O’Brien’s captivating energy compliments the multi-faceted lifestyle she has drawn up for herself. Like a true Gemini, O’Brien immerses herself into a well-rounded daily routine including responsibilities as a senior womenswear design position  for Vivienne Westwood, a nationally published poet, and a post-punk front woman. Over the past few years, her alluring spoken word has been globally recognized. Her rare and unique sonic style focuses on the workings of language through ruminative lyrics and the absence of vocals.

The origin of O’Brien’s story is a limitless tale of self-determination and unalloyed manifestation. O’Brien reflects, “I collected the things I’m interested in. I went to art school and I knew I would do something in design. And so naturally, that unfolded into a career in designing clothes. There is nothing unpredictable about that aspect. That was the linear path that I knew I was on for quite a while. Then, the poetry and writing came quite spontaneously, I would say. It hit me in the face. It was important for me to act on it and see how that felt, to see if it felt honest and truthful. I had such an exciting time with my first performance, so I never really looked back.” O’Brien beams while elaborating on her unique origin story. Like a true self-guru, her self-knowledge flows through each audible word.

As a diverse artist, O’Brien acknowledges the realistic outlook on handling each passion simultaneously. “It’s like having another life going on beneath the surface. Those two things keep interchanging – some days it’s the music and the other days it’s design. With both fully existing, it creates a strange divide in me.” She defends this struggle, “It’s day and night, almost. I really benefit from that. If I were to have one career path (and if it were music) I would still need to find those ways of shutting off in order to give up space in my head and have free time to come back with a fresh mind.”

You are the creator and the thing itself, is that not wild?

O’Brien is a nomadic perceiver: freely looking for things to observe then imitate through precise imagery. Her work is an emphasis on tone and attention to lyrical detail, but the quality that truly leaves me stunned is her lucent storytelling. It is filled with transfigured poesy through each rhythmic execution. O’Brien’s recent work, Drowning In Blessings EP, is a sublime reflection of her dense yet sensational, post-punk idiom.

O’Brien guided me through what felt like a lucid dream when further explaining the importance of each track. Most Modern Painting, the opening track, is labeled as her favorite as she explains, “the piece is about maintenance and development of the self; this task that gives us no option. It’s not spoken about so much. People talk about self-care, but the constant progression and development of character not so much.” She pauses for a second and chuckles, inwardly, “You are the creator and the thing itself, is that not wild?”

Roman Ruins, a track written during her residence in a fifty person mansion, Sinead explains “there was never-ending noise, such as doors slamming. There were multiple rhythms so I wrote it about the whole routine of the rhythm and the theater of that place. It’s quite a tense piece as well because of sleep deprivation.” Fall With Me, “bit more joyous surrender.” Sinead continues, “I thought someday, what if you just give in for a second, just give in as opposed to giving up. Giving in would be sinking into something and letting it hold you, rather than resisting.” Conversely, the final track, Strangers In Danger is a crucial picture book, “similar to scoring music to a landscape.” The 2020 EP is just a small taste of O’Brien’s innate and tangible talent.

When asked about her inspirations throughout all planes of work, O’Brien ponders “I feel like inspiration comes after. I wouldn’t say I get inspiration from reading lyrics or reading other writers, because inspiration comes from when you get an idea that you need to follow through to its end as fast as possible and as hard as possible because it’s there and it needs to be executed.” She continues to say that even the artists she follows behind (Irish novelist Samuel Beckett, Irish writer Flon O’Brien, singer-songwriter Marky Smith and Bob Dylan) are only influential to her because “they found their voice, which is amazing, but you still need to do all of that work and find your own voice. You’re not an amalgamation of your references.”

O’Brien’s straightforward and concrete beliefs flow over all aspects of the creative realm, including the accentless-singing phenomenon. “I love to use my real accent as well, which is unconventional. It’s a real stamp of identity,” O’Brien shares. “Why does it feel like we need to match this unified language of singing like God? Why can’t people use their own voices and differentiate so everything doesn’t become a dilution of ‘the singing voice.’ That’s why I’m so interested in using my voice in different ways, which doesn’t mean I don’t want to sing. I sometimes sing, but also choose to speak.”

I like to have work that is uplifting and inspiring

SXSW 2021 was a global yet virtual reintroduction into the performance world for many artists, including Sinead O’Brien. “Ours was quite interesting. The British Music Embassy felt a bit like Top of the Pops, but in a warehouse and I loved it. I was thinking, yes, Julien Hanson (guitar) is on the podium, Oscar Robertson (drums) is on a riser and I’m on the ground, in my Gucci dress, this is great.” She, along with her band members, are ready to perform in a live setting.

In the previous month, O’Brien released a new track, Kid Stuff via Chess Club, and is preparing to release music alongside future live performances this year.

As we conclude our conversation, Sinead is asked to reflect on her work’s purpose. “I like to have work that is uplifting and inspiring – messages to self/others or little quick awakenings or reminders to be present and turn back inwards – see yourself, see how you are in the world, find your place in the world. I work really hard to be positive and to plow through the carnage of daily life.” O’Brien will continue to do just that: approach her craft without set rules while continuing to show the hopeful wonders of this universe – especially through post-punk culture where using one’s voice and spreading awareness is at the forefront.