With a hint of lyrical surrealism and bittersweet melancholia, Germany’s hottest export Giant Rooks make a statement with their debut album, Rookery, serving us a delightful, genre-free sonic cocktail. 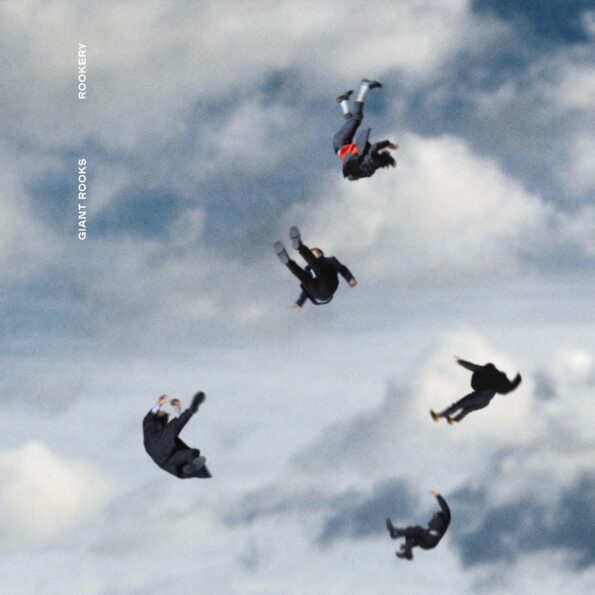 A project that’s spent years in the making, Rookery is the debut album from Berlin-based art-pop rockers, Giant Rooks, that has finally seen the light of day. Deeply thought through, uncompromising, and musically captivating, it acts as a realisation of the band’s unyielding spirit, songwriting prowess and lyrical finesse. Adamant in the creation of a sound that is solely their own, Giant Rooks continue honing their craft by fusing sparkling electro-pop subtleties and sleek hip hop beats with a Bon Iver-esque ethereal flair and classic rock ‘n’ roll storytelling. As a result, they’ve come up with something truly unique.

Opening on a cinematic note, The Birth Of Worlds is a quintessence of modern rock music. Taking the instrumentation to the next level, the track rises higher with propulsive drums and a magnificent string section, whilst we’re being introduced to a world of unrest and confusion – a recurring theme on the album.

A stand-out track on the record, Heat Up literally brings the heat with its electrifying soundscape. Oozing with fervour and excitement, the song glimmers with a variety of rich textures and layers. The driving rhythm is sure to take over your body, as groovy bass lines and urgent drums play against crisp guitars and bright synths to create a truly irresistible tune. Topped with frisky vocals and a funk house flavour, Heat Up will brighten up your day in no time.

Elsewhere on the record, What I Know Is All Quicksand offers intriguing stylistic choices. Switching between moods and tempos, it’s an electro-tinged rollercoaster of musical patterns and sonic variety. Lyrically, the track paints a surrealistic picture of a nightmare, balancing on the verge of fantasy and reality, and as we dive deep into the protagonist’s headspace, the band leaves room for interpretation. With rich undertones and R&B-infused beats, Very Soon You’ll See shines with a masterfully produced exotic sonic palette, giving you a palpable feeling of getting lost in the music.

Fluttering electronics in Rainfalls add a visual quality to the song, reflecting the melancholic impulse of “watching rains falls slowly”, whilst jazzy piano notes in Misinterpretations carry the soft and light vocals through. Flourishing into a delicate pop stunner, the track questions one’s existence as we hear: “How long / Can I fake it?”.

Unleashing their infectious energy into the world, Giant Rooks effortlessly shape pop-rock anthems with Silence, Head By Head, and Watershed; the latter beautifully captures the band’s experience of living and loving in a big city through hook-laden choruses and imaginative melodies. Emotionally-charged slow-burner In Your Arms is the last stop of this thrilling journey we’ve been on.

With a poetic lyrical depth, hugely metaphorical yet accessible, the record is a study in unrestrained progressive rock music, pop sensibilities and everything in between. Meticulous in their approach, the band doesn’t allow genres to define them. Marrying the sounds of the past with the possibilities of the future, there is no doubt that Rookery is Giant Rooks on the eve of global stardom.